Friday 15th January bought with it a touch of snow and a pre-birthday crafting day pre-booked with my crafting buddy Rebecca.
We arranged this day back in December as Rebecca has been working hard, and, as in life things kept popping up.
Anyhow after a slightly later start than usual start due to the tiny amount of snow that seem to stop Britain in its tracks,  (slippery roads due to no gritting don't know at would happen if we more than an inch), we began.
Rebecca produced two bottles and bought up a picture on the Internet and said, "We are going to make something like this". Followed by a stipulation that I could not use flowers...... bar humbug!
Apparently I use far too many flowers in my projects.
First up we chose a picture to transfer onto fabric, this was done in the good old fashioned way by putting a medium, in our case satin glaze onto fabric then putting the image face down onto it and burnishing the area.
While this was drying we gave our bottles a coat of gesso, this led to another quandary I painted up and down the bottle, Rebecca went from side to side. We used the gesso to stick on torn old book pages, I did my pieces going in the direction of the text across the page and Rebecca did longer lengths going down the pages, this made Rebecca laugh. What can I say, strange! 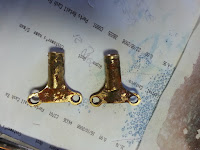 While everything was going on we also rusted a couple of radiator keys that Rebecca picked up from B&Q using Paperartsy rusting powder. 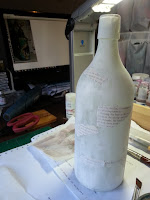 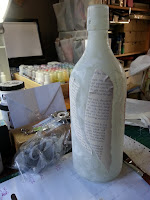 Next was colour! Now then at this point for some strange reason I asked my crafting buddy to chose the colours and she chose for me two shades of pink, brown and an off white,  me and PINK!
So I took it on board and worked with my selection. Once the image transfer was dry we remove the back layer by spraying with water and gently rubbing to reveal the image beneath.
This image was then adhered to the bottle with a gel medium along with beads and fabric mixed with texture paste, then the messy task of painting with PINK began. 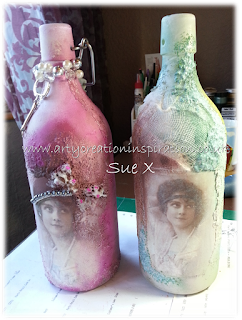 We used a sponge to blend the colours around the image and bottle, this is the point we realised the kids would be arriving home and so I had to leave and leg it home sharpish. 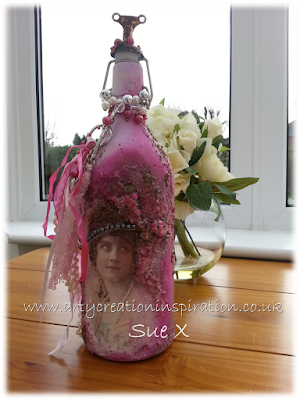 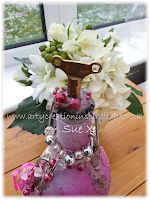 Once home I decided I had to finish it and so after sorting the girls out with the usual beverages and snacks I raided my stash of ribbons and beads, no flowers and finished it off.

Birthday project complete, thank you Rebecca for making me use pink and for making the tea and cooking lunch of Bacon and Brie toasted sandwiches, yum!
I had a fab crafting day.