Stampotique Challenge - 212 - Use Only Two Stamps

Stampotique Challenge this week to use only two stamps.

Initially I thought OMG two stamps, I can't do it!
In reality it's easy as I have masks, die cuts and all sorts of materials to create backgrounds/wording. Yes, my Dymo has made another appearance, just love it though this time I cut a strip of basil core card to print on and sanded it back to reveal the title.

This week I have an anniversary card to do.
My plan was to die cut a heart and use the waste part to create a mask then double layer with another mask to add an interesting background to work on. 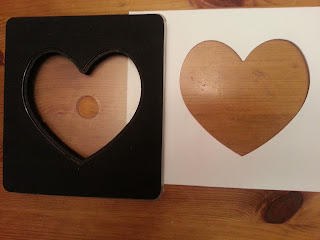 Worn Lipstick was lightly rubbed around the edges of the homemade heart mask, the heart die cut shape was then used to mask the pink heart and overlaid with tiny sequin waste to which Broken China was lightly applied to create a subtle spot.
Water was sprayed onto the background left for a moment or two and lifted away with a piece of kitchen roll to give a mottled effect. Pale pink texture paste was put though a mask to produce the raised hearts. I would have liked to use  Torrente - Daniel's Hearts stamp but I don't have one yet, none available in UK at the moment so when my random winners $30 comes through I will be ordering from Stampotique in the USA (along with a few others). Thinking  about it though that would make three stamps so it's a good job I don't have it. LOL.
Glossy Accents were added to a few hearts and Wink of Stella in Clear was added to the remaining ones to add another couple of layers.
I used the new Kate Crane Boy Angel and Ta-Dah (First outing for these two stamps).
I used the legs/arms  from Ta-Dah  to make matching legs and  arms to reach together and hold hands.
The characters were coloured in watercolour pencils.
Tissue tape  was added to create a grounding for the characters to stand on.
Everything was assembled together and there you have it one anniversary card. Only it had something missing, so, I cut a square border (the old fashioned way as I don't have square layering dies) with craft Knife and ruler.
It's very pink and colourful, totally not me but it's good to get out of your comfort zone occasionally especially when your favourite colour is black. 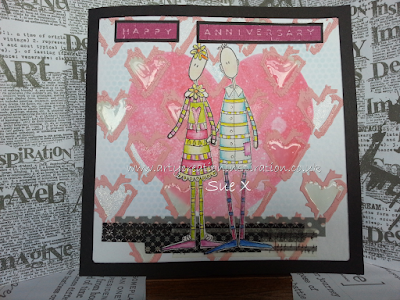 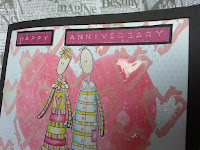 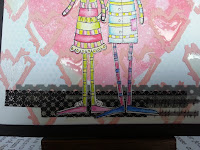 Hope you like it.
You can find lots more inspiration over at the  Stampotique Design Challenge blog from both the designers and crafty individuals like myself.