With the girls back at school and one thing and another I only had Friday of this week to play, I mean really play, get messy, plod at my own speed. Hurrah!
I've been waiting a while but it was worth it.
It all began with two  6"x6" box canvas's given a layer gesso to prep them, they were bought prepared but I always give them an extra coat to put my mind at rest.
I used my favourite colour black with shades of grey and white, then painted a combination of them randomly and let dry followed by scraping and spreading of  the black and white.
Lids from pens, pencils, shampoo bottles and foam squares helped add interest to the project. 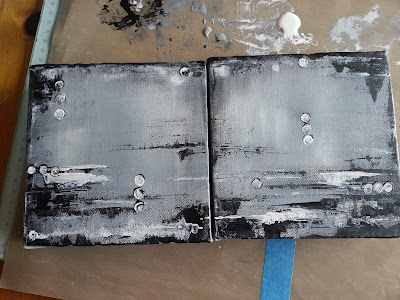 A tree stamp was stamped directly onto the canvas, however you couldn't make out any detail, I decided to use this image to give the impression of a shadow of  trees.
The trees were then stamped onto watercolour card fussy cut out and coloured with rusty hinge distress ink to an autumn feel.
Brown wire was coiled with pliers, twisted  then flattened as much as possible.
Rusty splatters were added and dried, the trees and wire stuck into position and small micro beads were mixed with soft gel and added around the wire and randomly around the canvas.
A touch of random stamping added a further layer.
Almost forgot, the title was a play on words as in Autumn is due soon,
I know it's a miserable time of year but the colours of the leaves can be so amazing, but I also thought of Dew first thing in a morning. 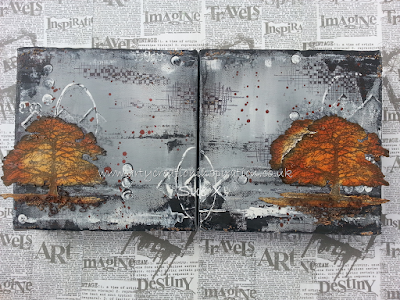 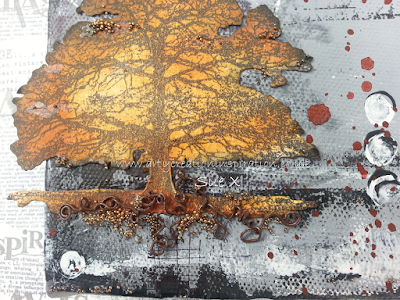 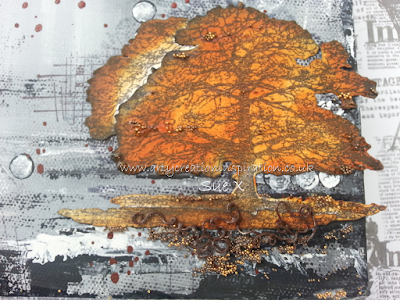