Over on Paperartsy their new topic is Art Dolls check out the initial posting here, it contains a great video which my crafting buddy and I found our mojo from to create our art dolls.

Rebecca and I have been trying to have a play day at least once every half term, so when she said come on round and we are going to make Art Dolls I jumped at the opportunity.

I gathered my supplies and off I went.

At this point I diverse a little, many, many moons ago (about two years) on one of my crafting buddy's trips to IKEA she returned with a couple of alarm clocks.
We took these clocks apart and inked them with alcohol inks in golds, fab effect.
That is as far as we got on that day, since then they have been lying unloved in a draw.
We decided to incorporate the unloved clocks into the skirts of our dolls, Rebecca wasn't happy with her colours and so repainted it.
While this was going on I put my head together literally.
With the knowledge of making these dolls a day in advance I made a mould from a barbie dolls face (barbie found in toy cupboard),  a paper clay impression was then taken and that is what formed our faces.
Metal embellishments were layered up and glued together the face was added and small beads inlayed around the face to fill the gaps and add detail. Rusty wire was curled with pliers to create the whispy tendrils of hair which petrude between the metal bits a long hat pin was threaded through the back to enable me to attach it to the body. 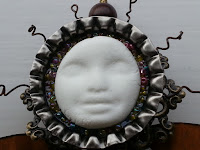 The face was painted black and then highlighted with good old treasure gold in various shades of gold. 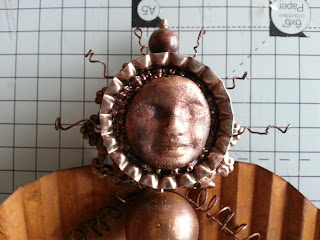 Back to the frame work.

We began by making a wire frame to base our work on, I wanted to make a tall skirted doll and Rebecca wanted a version with a bustle to the rear (immediately the thought of the children's film Robots popped in our heads, great minds think alike - robot, big butts, clocks).
Back to the task at hand, after a while of puffing and panting, twisting and turning, a few murmurs of complaints about the pliers not being up to the job the frame work was finally done.

I eventually decided on using tissue paper to add the first layer of colour this was attached with print stick believe it or not. 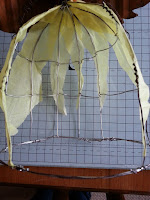 While that was drying I made the arms from more rusty wire (very messy), making the initial first piece with loops at each end. The second layer of rusty wire was wrapped around the first layer using a paint brush held along the length to create a looser loop (paintbrush removed obviously). 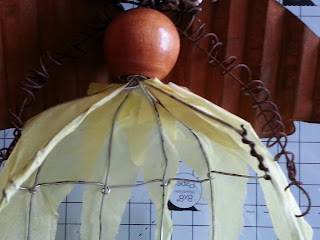 Then we ran out of time, I had to rush home and be the doting mum (pretend I'd been waiting for them to return all day, LOL).
Refreshments and snacks on the table for girls and back to it.
Book pages were inked in Rusty Hinge distress ink and torn into strips, Gathered Twigs distress ink and was added to the edges for a shaded effect. Rusty Hinge was added to the tissue paper to take away the harsh yellow colour and the torn book pages layered over the top.
Lengths of cheese cloth were distressed by pulling the threads apart and this was added to the waist line dangling down.
Gloss medium was added over the top to make it more robust which made the distress ink spread to the cheese cloth in places, very cool effect.
The head had also been attached to a large bead which Rebecca found for me this was coloured with treasure gold in matching colours and the head was attached to the body, the arms and a set of rusty wings were added. Micro beads, beads and sequins were added to the wings and dress form to add detail, almost finished.
This is turning into a mega post!

Now to the clock! basically the clock was coloured with inks as previous stated, so all I had to do was to create a clock face and add a few embellishments.
A clock face was printed off and trimmed down to size, I knew I wanted to be able to see through the face and so I sandwiched it between two circles of acetate, clock hands were added. Not being completely happy I stuck die cut cogs which had been treated to a touch of treasure gold onto another circle of acetate and secured it to the back of the clock.

Apologies to Rebecca, I have used a few tiny metal roses (I know I'm banned from using them on our projects but it just needed them). These were placed in the bottom of the clock where I had left a gap between the rim and clock face (deliberately of course) along with more micro beads, regular beads and sequins. A Small round tag with message was stuck to the bodice bead, and a chain with a key attached was added to the hands.
The clock was placed in position and mission accomplished. Art doll complete. 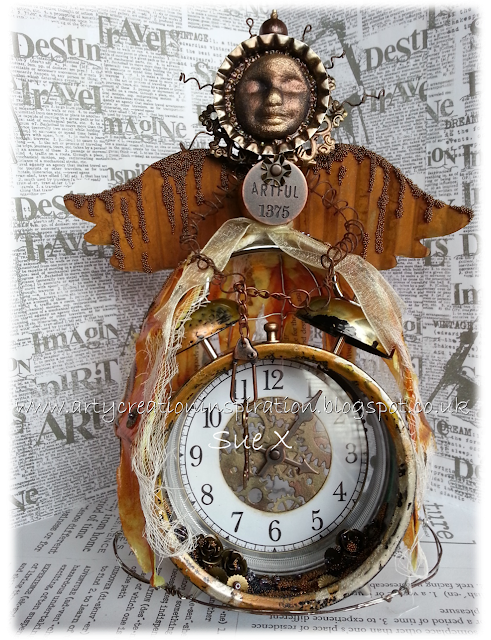 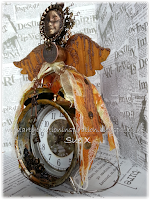 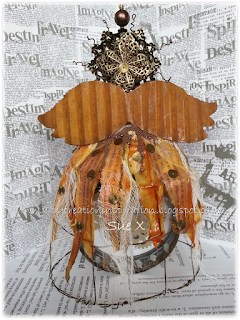 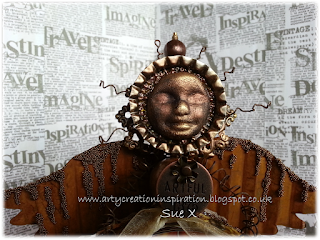 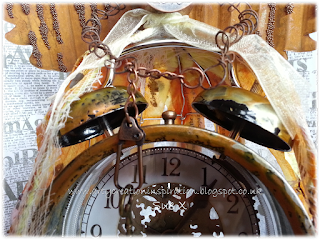 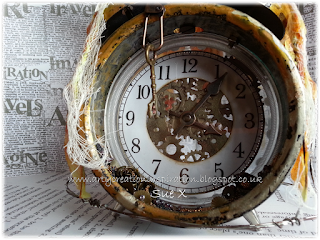 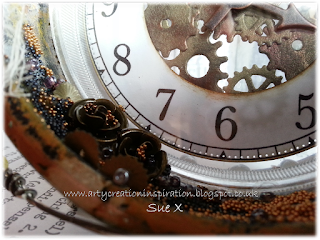