Just about feeling better after what seems like an age of coughing, sneezing and blowing my nose. I thought yeah! then night time arrives and it's back with a vengeance.
Anyhow, because I was feeling ok during the day I took a couple of my makes to the local-ish craft shop where they instantly booked in a class to make them.

To begin, purchase a paintbrush available from any good DIY shop or the range sell a selection at a reasonable price. Give the paint brush a light coat of gesso to provide a grip for top layers, use the gesso on the paint brush bristles to give the impression that the brush has been used. 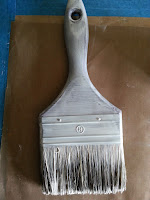 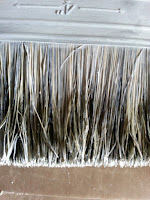 A new paint range is available in the shop called Nuvo never used them before so I picked up an olive green and burnt umber(brown), after using gesso the paint appeared translucent which is fortunate as I wanted to see stands of white beneath.
Next up was to mix clear texture paste with brown paint and flakes to create texture to both the front and back of the project, this was helped along with a heat gun which also made the bristles shrink up and distort a little. 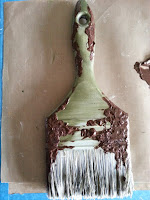 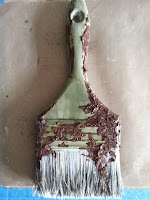 While the texture paste was still wet nuvo glitter in a bronze/brown colour was sprinkled over randomly.
A touch of caramel and white paint was added with finger tips to add dimension to the texture. 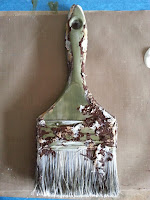 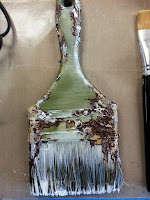 A small amount of cheese cloth was teased apart and glued onto the front of the brush followed by a touch of natural fibres. Moss and cones were place in position and stuck down. 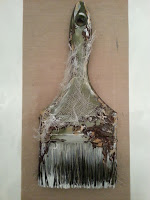 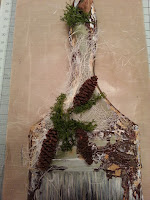 Flowers were created from the heartfelt poppy die, two of the medium size plus two of the small size were cut and coloured with scattered straw distress ink. These were then spritzed with water and shaped over a paintbrush handle by pinching the petals to form tiny ridges, then left to dry naturally. 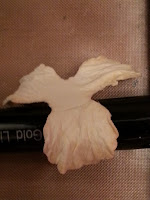 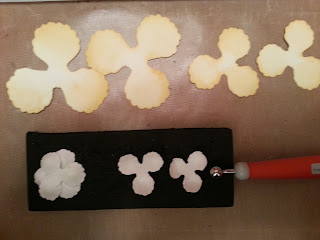 The six smaller flowers were left white  misted with water, using a large ball tool to press into the petal to create a rounded effect with small creases around the edge, two leaves per flower. The centres were made with a glue gun a tad of white glitter followed by a touch of  white glue around the centre and a touch of flower soft. The tiny tiny flowers were made from the same three leaf petal by fussy cutting across each petal, a small ball tool was used to press into the centre creating a small flower. A hole was put in centre with a pointy tool and a stamen thread through and stuck with a touch of glue. 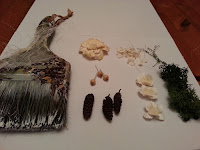 The bits were assembled and glued into position. A touch more white paint was used to highlight raised edges and also a tad more glitter and flakes.

Here is the finished project. 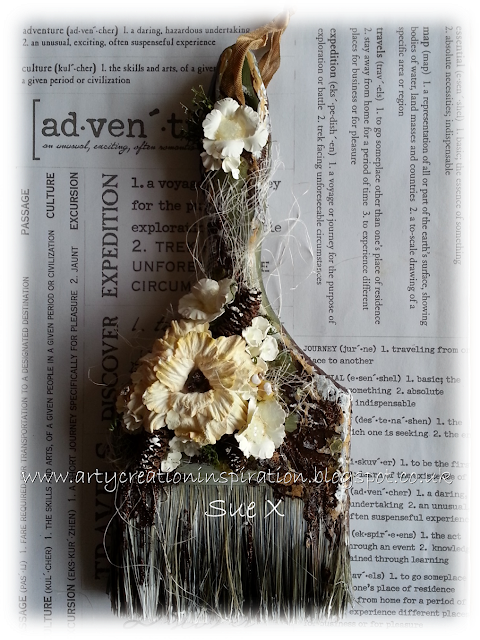 And here are a few more photos. 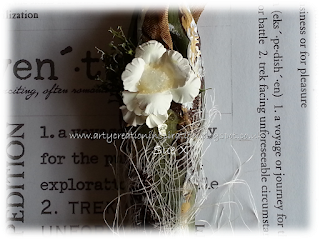 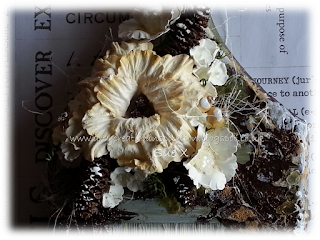 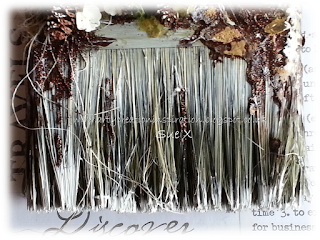