This is a little project that I have been pondering over for a while now.
Friday was suppose to be a dedicated craft day, but life happens and yes I am easily distracted.

This included going on a hunt the green tennis ball in green grass that my friend Rebecca's dog kept hiding from us. Followed by a look at a possible venue for our craft group which we have been trying to set up now for oh, about a year now.  Followed by a trip to the shops for the evening meal.
Then a load of washing and finally I sat down about 11.30am only 4 hours to craft before the girls come home.
Phew!

I began with my Destination Unknown canvas, adding more wooden bits, gluing them into position with 3d Matt gel and put to one side to dry.

I made a template of the teapot and cut two from thick card taking time to ensure both were the same. 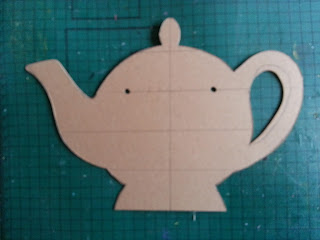 I then cut various papers into 2" squares, inked the edges began to stick them to one of the card teapots creating a patchwork effect.  nice all the squares were stuck down and dry I flipped over the design and using a craft knife cut away the excess paper. 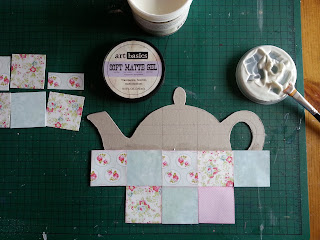 The edges were inked in Black Soot Distress ink.
Then two holes were punched into the shape to let me thread elastic though this was then stitched together at the back to secure it. 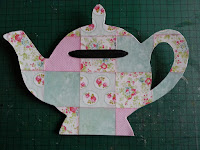 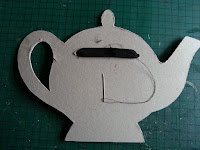 The second teapot was glued to the first and left to dry under the craft mat.
During which time I painted a layer of gesso on my canvas project.

I made  a cover for a small note pad, decorated it in the same coloured papers and pushed the back flap down through the elastic.
I almost forgot, I added a little random stamping of text for  more interest.
Die cut leaves were double dipped ink two green distress inks and dried these were glued flat to the canvas.
Ready made flowers were used in white and colour was added with a paintbrush, again using distress ink pads and a little water. 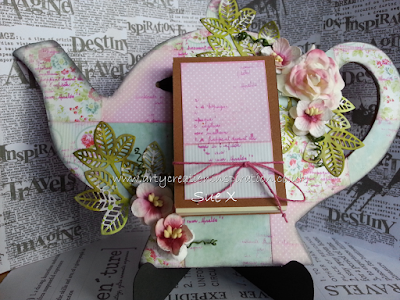 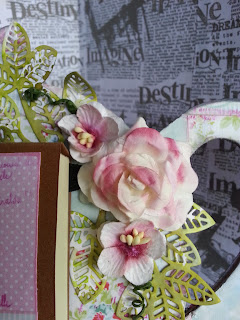 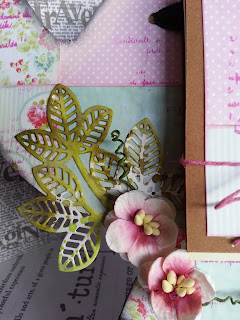