Today was a play day, my crafting friend Rebecca invited me round for a crafty play and of course I said Yeah! followed by, what we doing, do I need to bring anything.

So armed with a couple of 6"x6" box canvas's and my new JOFY stamps I headed on round to visit her.
We began by applying paint directly to the canvas and spreading it around using an old credit card.
This was mine.                  This was Rebecca's. 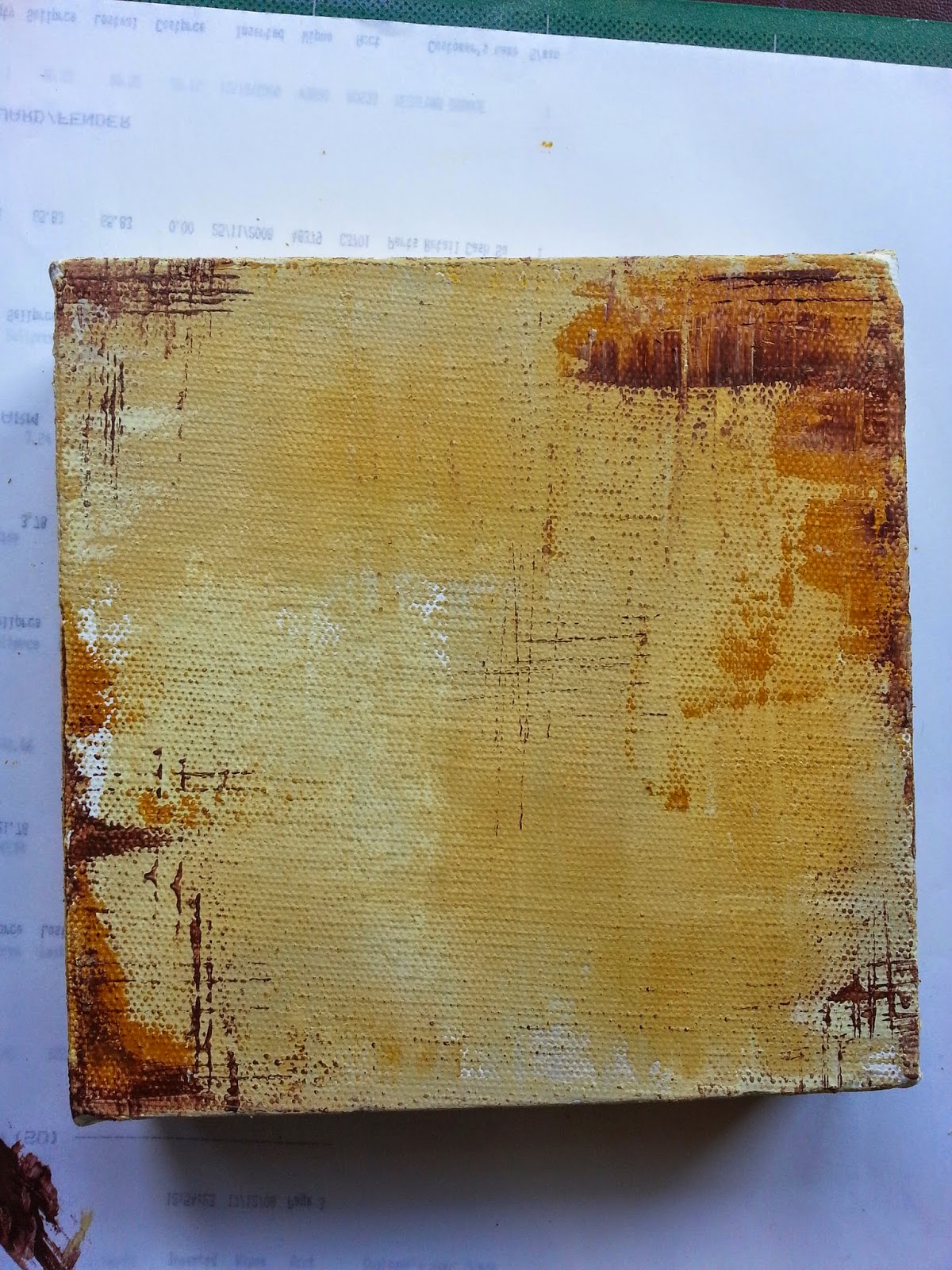 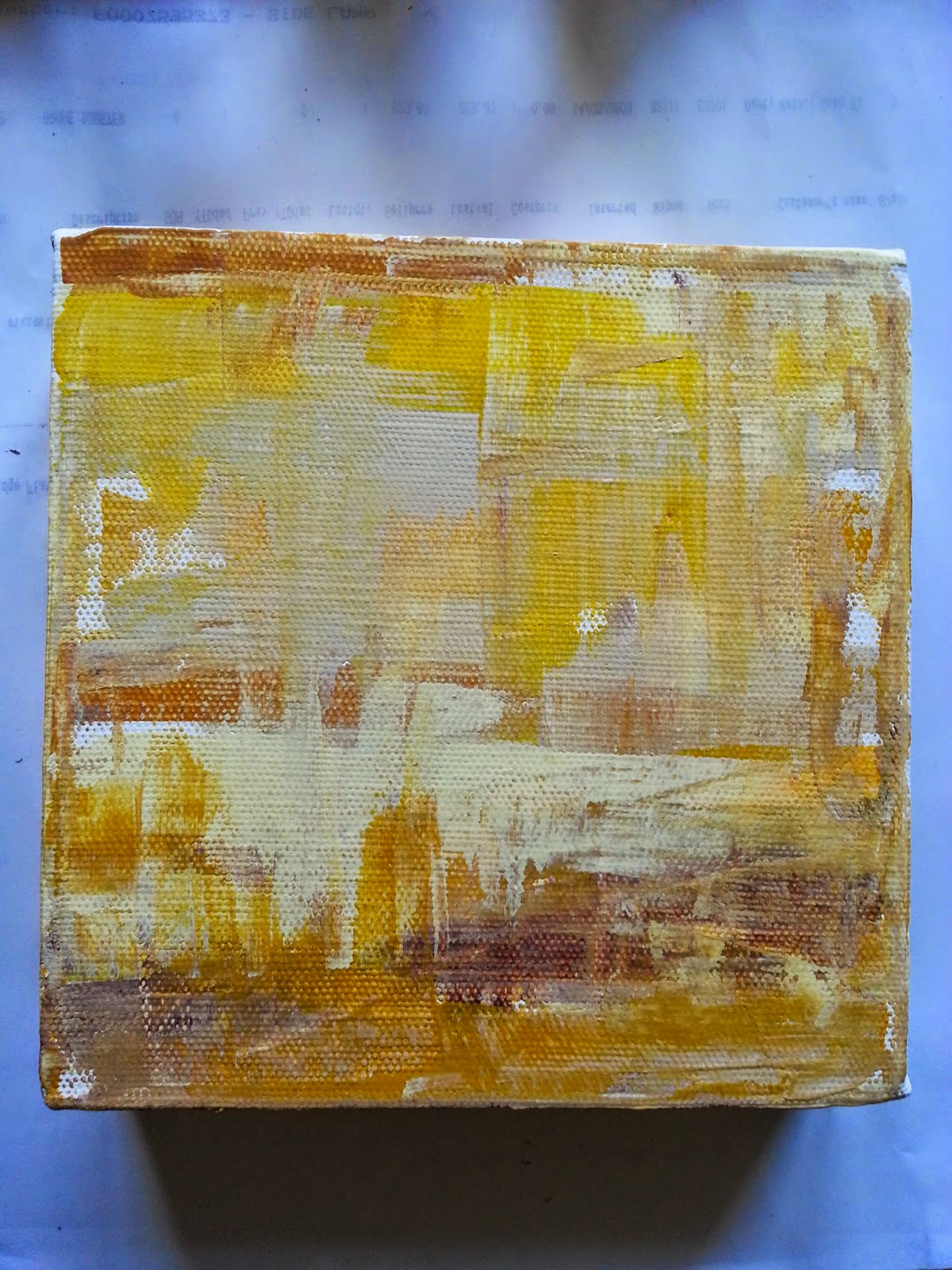 As you can see the same paints, the same technique but very different effects.

Texture crackle paste was added through a stencil and left to react. Although the paste was supposed to be clear  I was a little impatient, so  gave it a blast with the heat gun and it has remained a white opaque colour. This picture was taken before I blasted it as I didn't think the texture would show up afterwards. I was wrong. 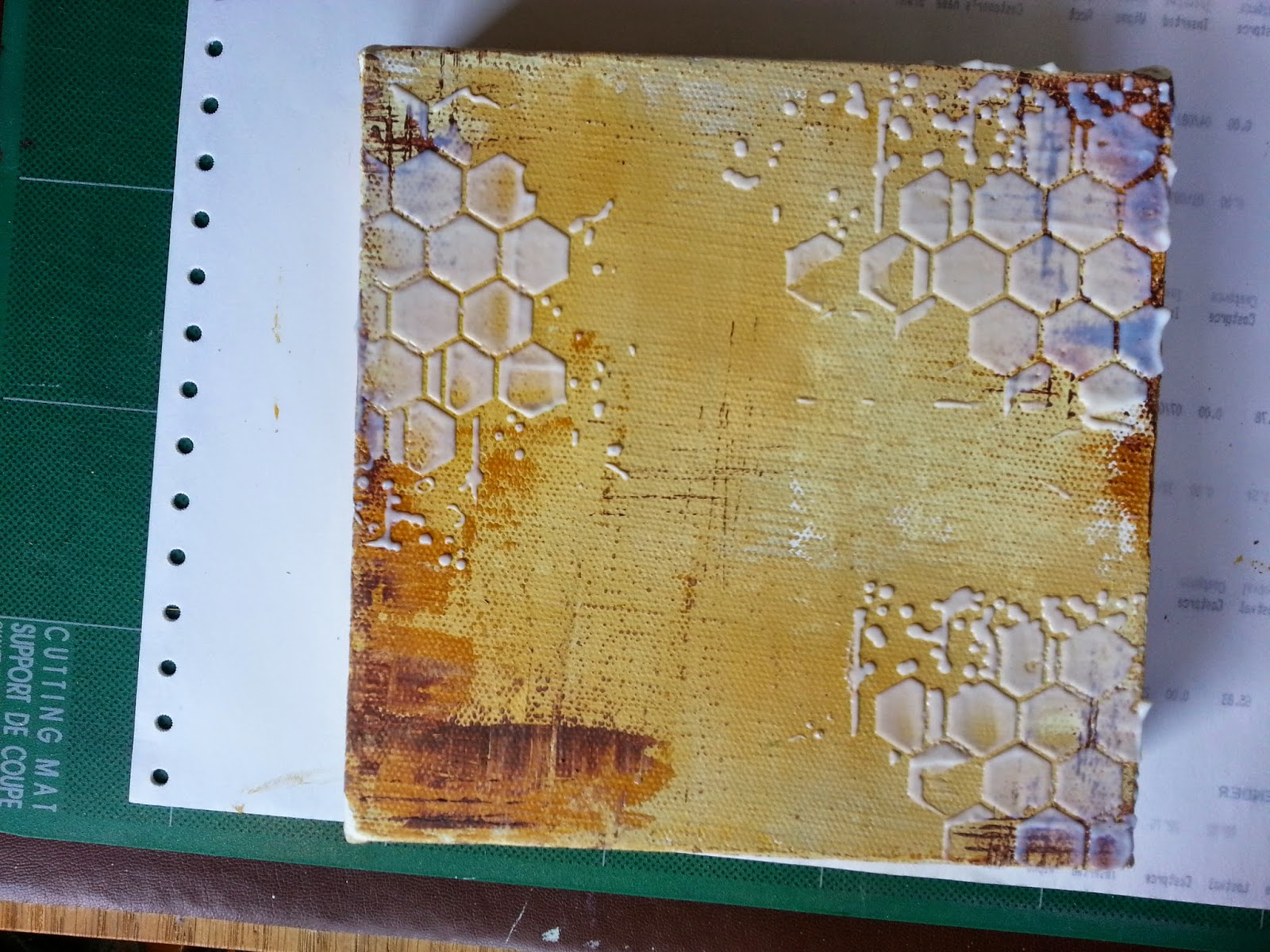 The Bee hive was stamped onto watercolour paper and cut out, the edges were coloured with distress ink then mounted on card with 3d foam to add height to the project.
Bee's (stamped on tissue) were cut out then glued into position, the body of the bees (stamped on watercolour card), were cut out, coloured and glued onto the top of the tissued version. The larger bee was also stamped on a rather nice textured bit of mulberry paper to give the impression of fluttery wings, this layer was added between the tissue version and the watercolour card body.
Flowers were stamped, cut out, coloured and added to the canvas with 3d foam to lift them off the canvas.
Before we knew it time had flown by and I had to leg it home for the girls to get back from school.
This was my finished project. 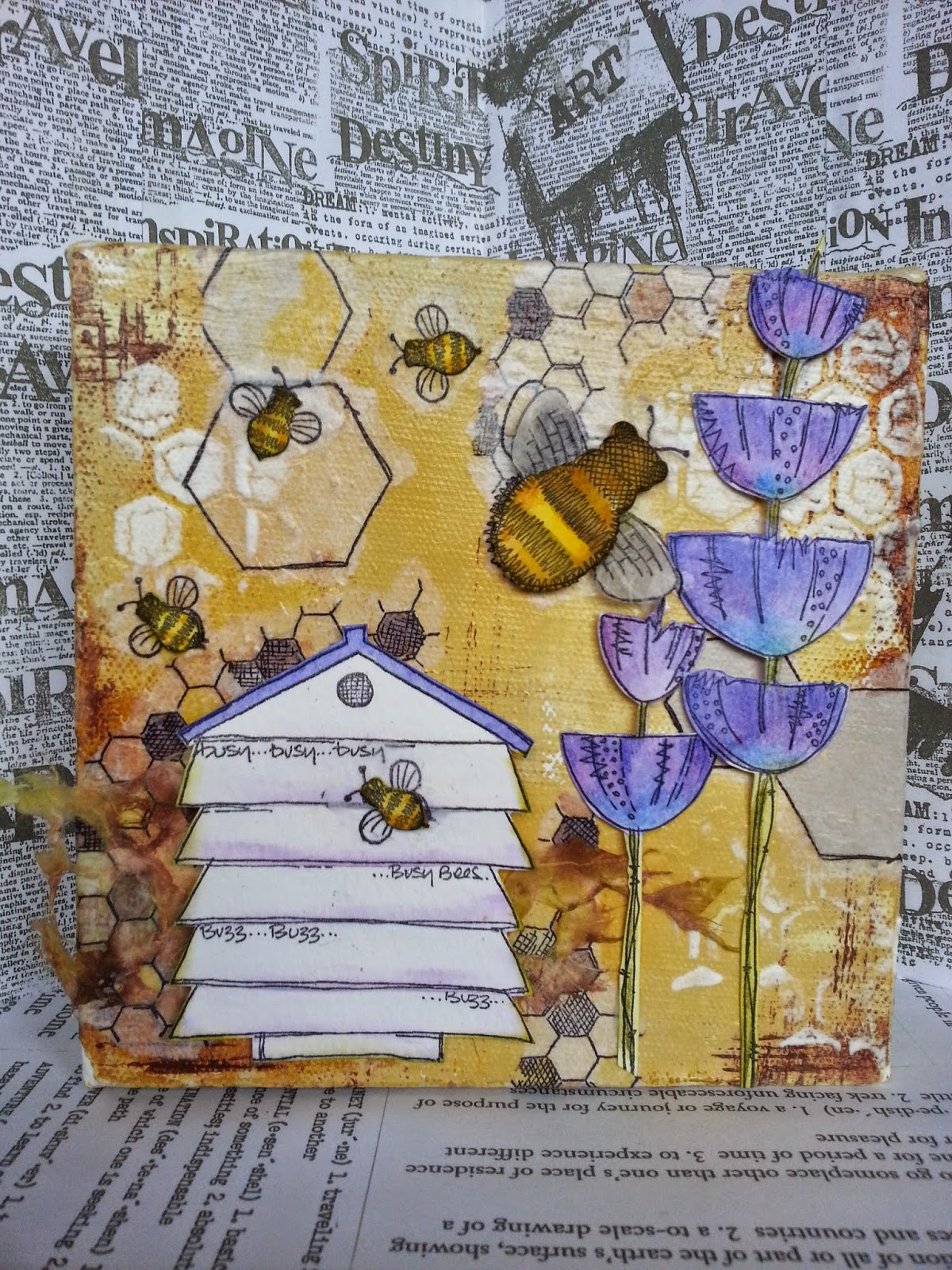 You may have noticed the textured mulberry paper behind the bee hive, this was left over from the  bee wings and I needed to use it, so I added colour with the a touch of paint and added it to the project.

This was Rebecca's almost finished project, pop on over to her blog and check out the completed version. She was keeping us both topped up with tea and chocolate as well as emptying the washing machine, putting it on the line and keeping an eye on Daisy the dog all at the same time. 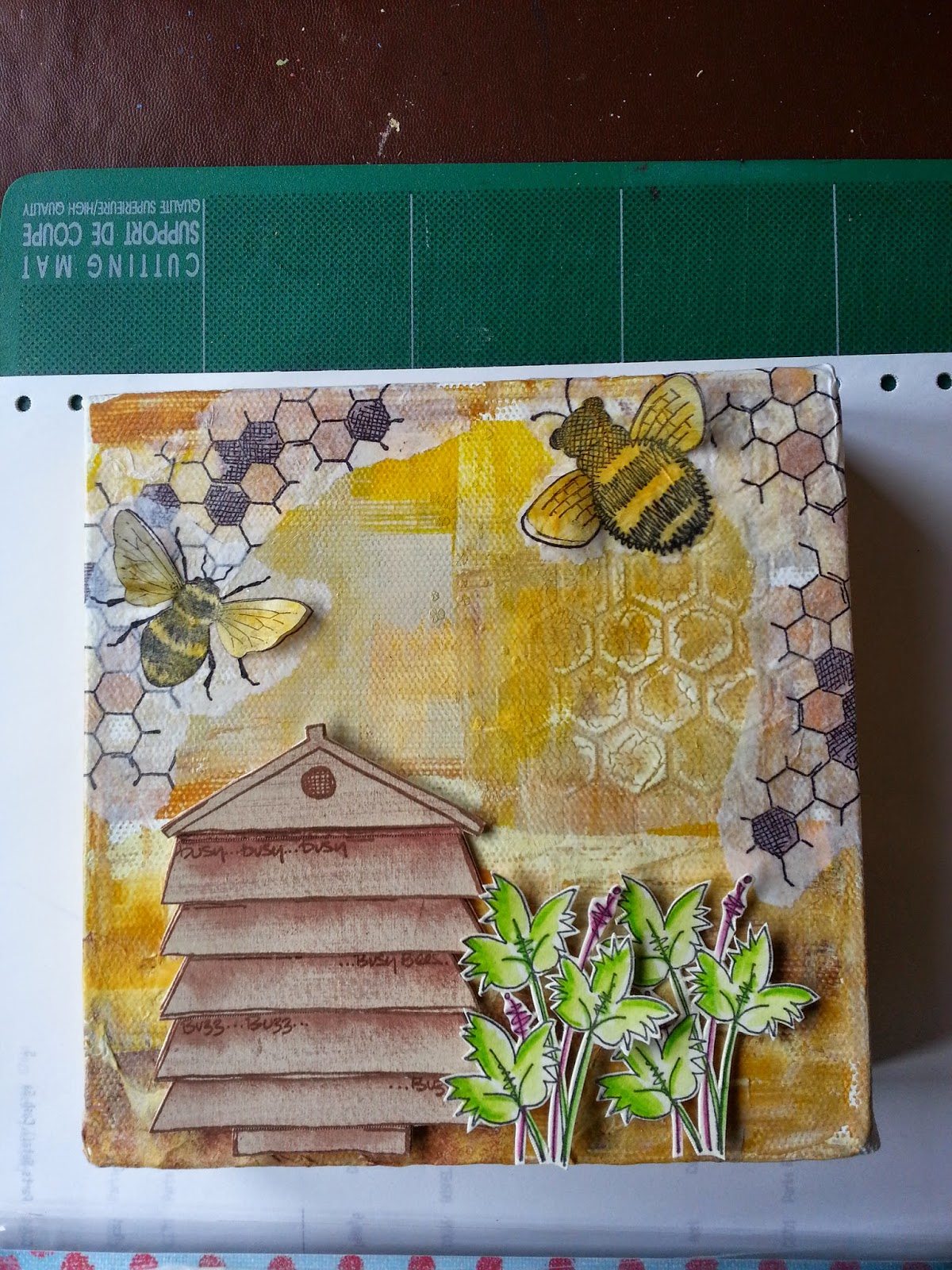 Thanks for the play day Rebecca.
Sue x