Monday of this week bought on an impromptu craft day with my crafting bud Rebecca.
We decided to re-visit an old favourite of cutting out an inset into pages of an old book and creating a hiding  hole to embellish.

We began by carving out a hole (as previous mentioned), followed by roughly slapping on medium to stick the pages together. When I say roughly I mean not going into the corners and not paying that much attention to accuracy,  my dad would have a giddy fit if I were wall papering, as a child I used to help and his big thing was, " Make sure you go into the corners and get the edges".
As I wanted the edges of the pages to appear still loose my slap dash way was fine.

We began the outside of the book by layering on fabric and texture paste then moved to the inside of the book. Rebecca and I have the ability to come up with a project, be in the same room chatting about what we're doing and end up with completely different looking projects it's quite cool.
As usual mine was turning dark, black and rusty. Meanwhile Rebecca's was Claret and a lot  brighter (nothing new there) LOL. To see more of Rebecca's pop on over to her blog here.
Next up the fun bit, decorating!
Inside first.
I began by gathering together a few cogs, light bulbs, keys 'n' stuff. I had bought some rusty stars when at a Workshop a few weeks ago, my goal to retain the yummy rusty colour (these were glued into position after the painting was complete). Art stones large and small were mixed  with modelling paste  and added randomly to add texture, the inner resess was painted with black gesso leaving areas of white. When dry a layer of  rusty paper paint was added again randomly over the black and white areas to get different shades of rust.
A small amount of caramel paint was added to highlight the balls and cogs, edges etc.
The rusty stars were then added to the project along with micro beads and a touch of treasure gold.
Various die cuts were added to the cover to create interest and painted black using the same technique as before. The rusty embellishment was added along with more beads and a couple of tiny metal roses. 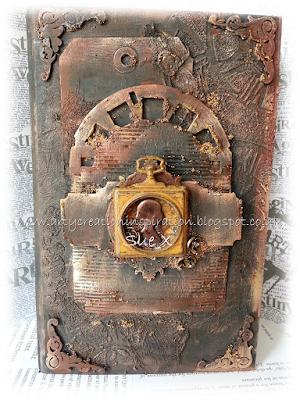 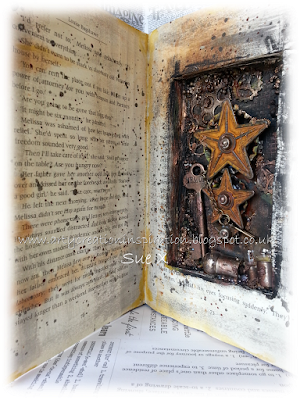 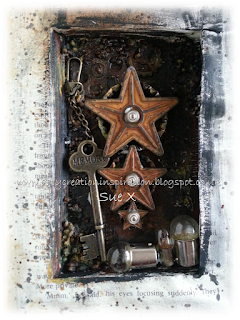 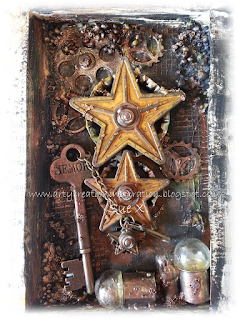