I've had a jolly old time making Christmas Decorations. A Christmas Wreath was on today's list to complete, it began life as a MDF shape one part of two which my friend and I bought at Ally Pally a little while ago, I had the small one and Rebecca had the larger one.
The base coat was a layer of white gesso to act as a primer, the second was a coat of  mermaid blue.
A layer of crackle glaze and then snowflake on top, sit back and watch the magic.
The whole thing was lightly sanded to bring out more cracks.
A touch of brown distress ink finished off the base. 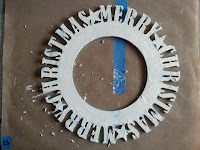 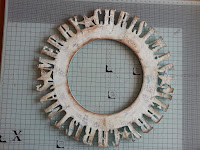 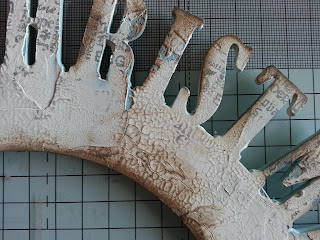 The next bit I forgot to take pictures, I had prepared a few die cut poinsettia's, to be honest I am amazed they survived being out on the table as my viscous  kitty normally rips my papers to shreds.
All that was left to do was stick beaded stamens in the centre's. The fur tree sprigs were die cut then triple dipped in three different greens and left to dry. 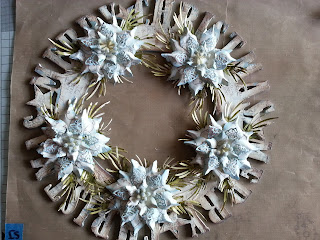 As you can see it looks a bit bare, I also had left over pine cones and berries which I had prepared for a different project, to these I added white gesso to give the impression of snow and glittered them at the same time using gesso as a glue.
3D Matt Gel was used to stick all of the elements to the MDF and left to dry. 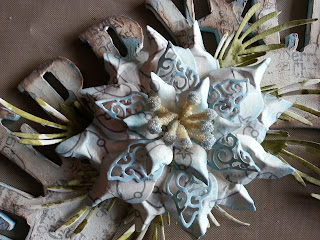 White paint was also added to the edges of the lettering and flowers and left to dry.
I printed off several templates of reindeers and combined them to make one I liked then cut two out of card board. These were glued together and bits of the top layer were torn off to reveal the underneath. This was painted brown, then a lighter brown was dry brushed on top followed by a touch of white gesso applied to the top edges (and glittered). Sorry no pic's. 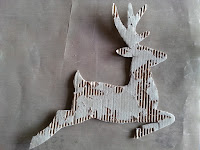 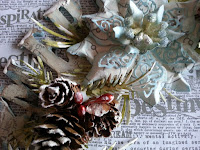 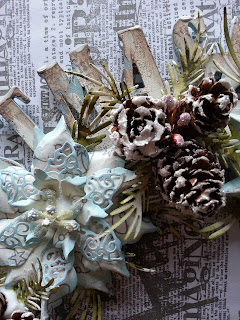 With that all done my only decision is with or without the reindeer?
I'd love to here your opinion. 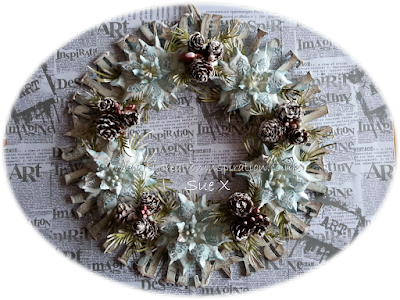 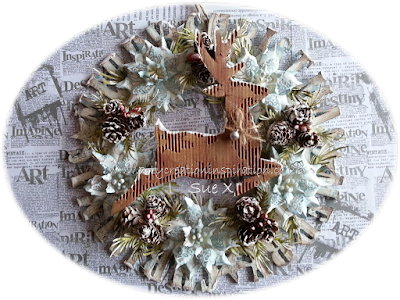