It's amazing what you can create with a blank box canvas, paper, a bit of paint and lace.
When I say a black canvas, it was previously painted and I didn't like it very much so I re-gesso'd it producing an almost perfect blank.
I covered the canvas with different lace and ribbon, then gesso'd the canvas again.
I then set about making flowers and spirals from a thicker quality card, thin strips were cut and wound around using a pair of tweezers, the tension released a tad and the outer rim was glued to give the effect of a coil.
Flowers were made from a rough circle by cutting a swirl into the centre, then winding from the outside inwards and gluing in position, a larger one was made in same way with the addition of folding over the outer edges of the cut swirl to produce a sort of rose petal.
Die cut smaller flowers were shaped with a ball tool and layered together,
a couple of die cut cogs were stuck together to make it appear thicker and the same with the butterfly. 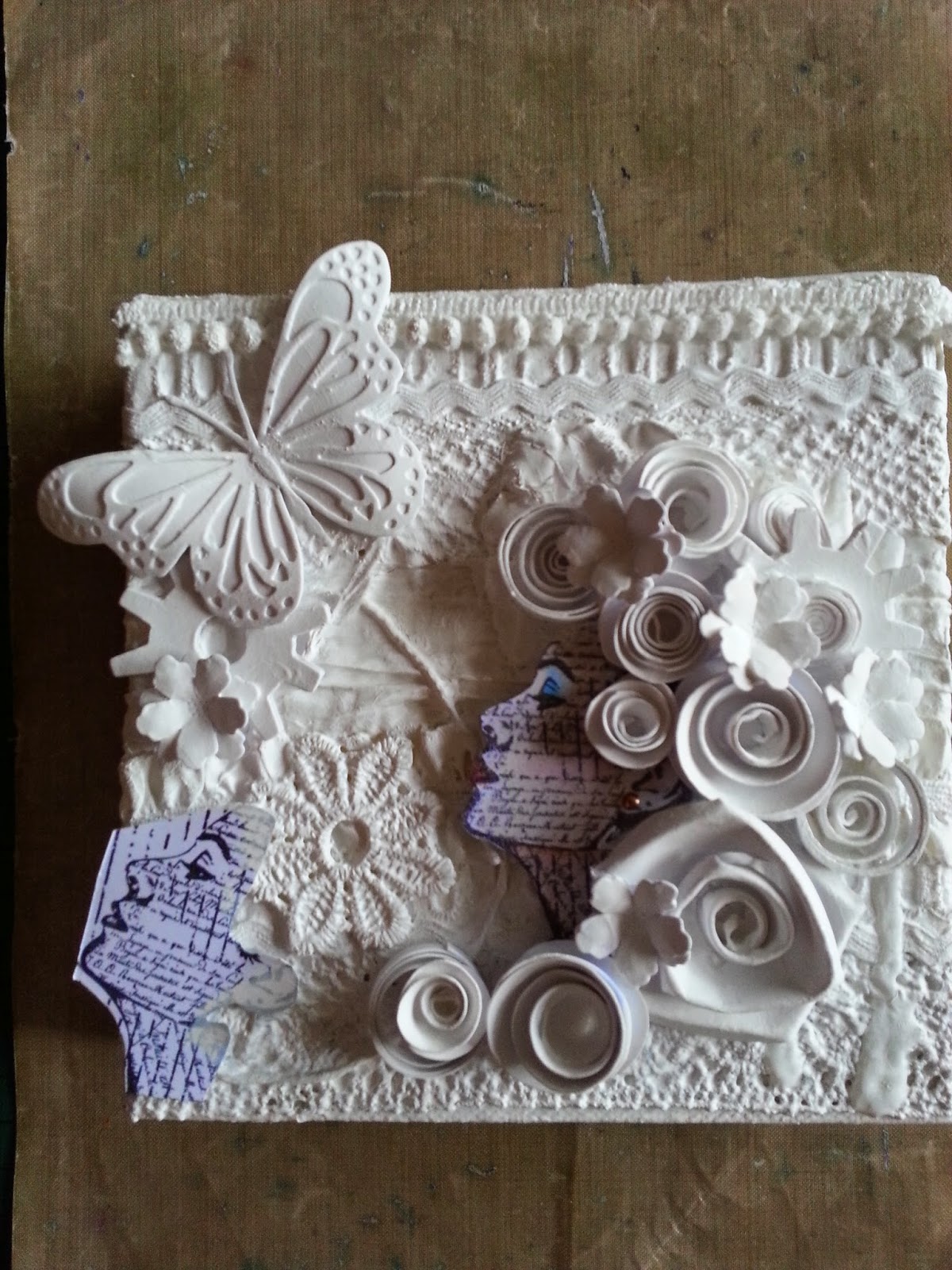 A stamped image was coloured with pencils and arranged on the canvas with all the paper bits and pieces. Once happy with the layout, it was all stuck down and more white gesso was painted over. An extra stamped image was cut to fit over the first to protect it from the paint being applied.
Once dry a couple of different colours were put in a spray bottle and water added to dilute the paint.
Paint was sprayed in a pleasing manor and dried, treasure gold was used to highlight different areas, and a charcoal pencil used to add shading then blended in.
A little perfect pearls was added to the centre of the small flowers.
Finally a small embellishment added as a hair bobble. 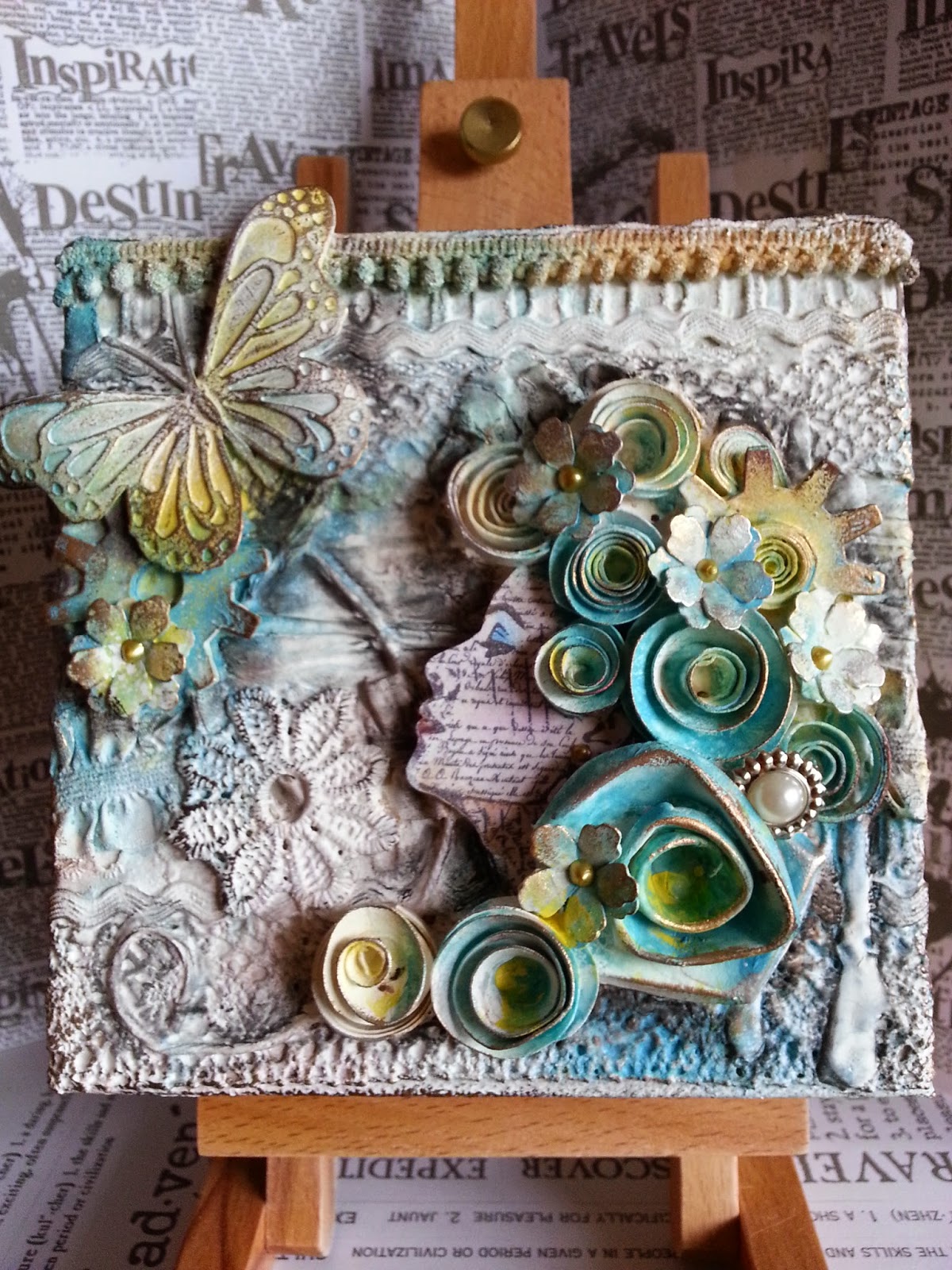 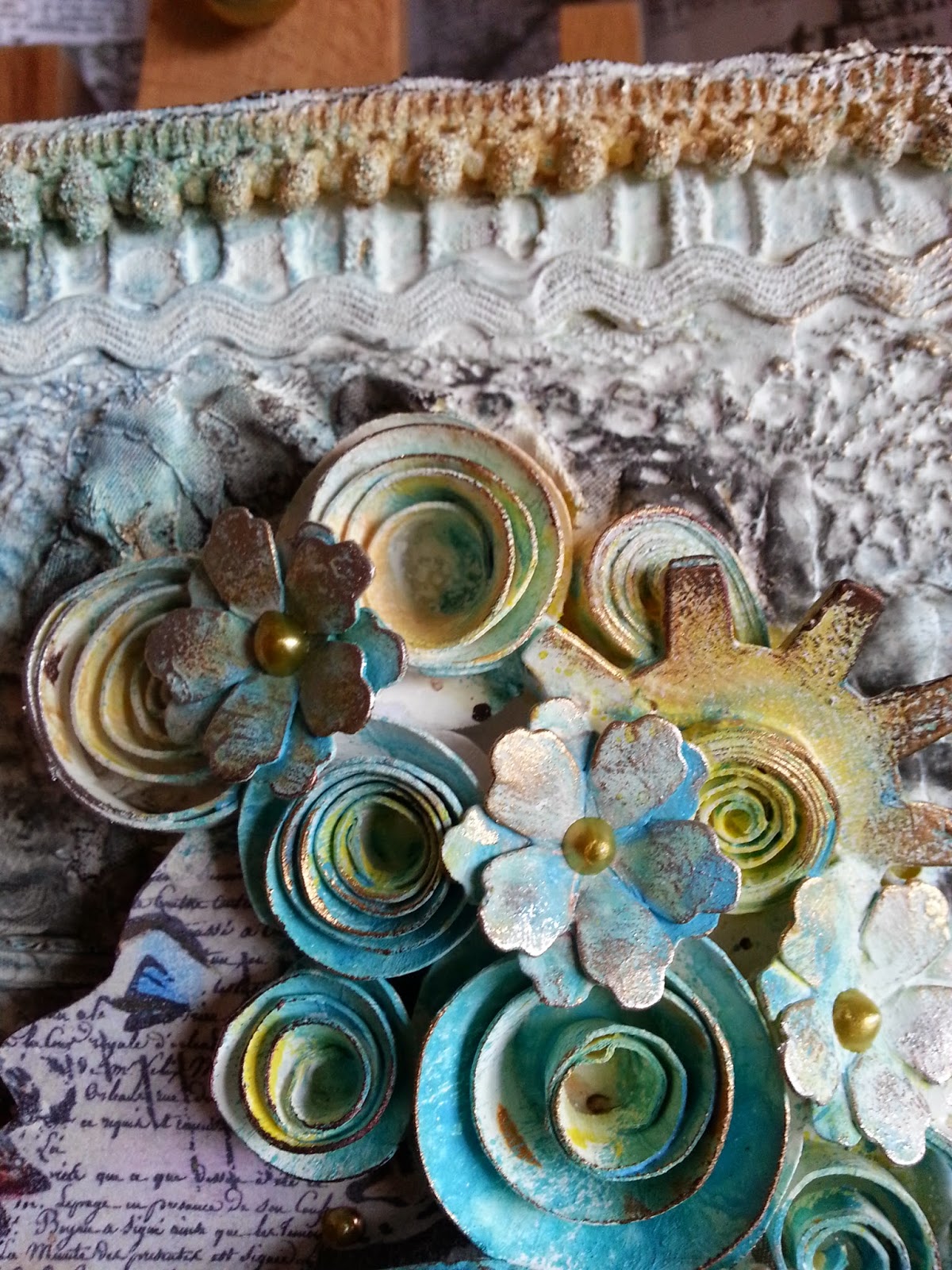 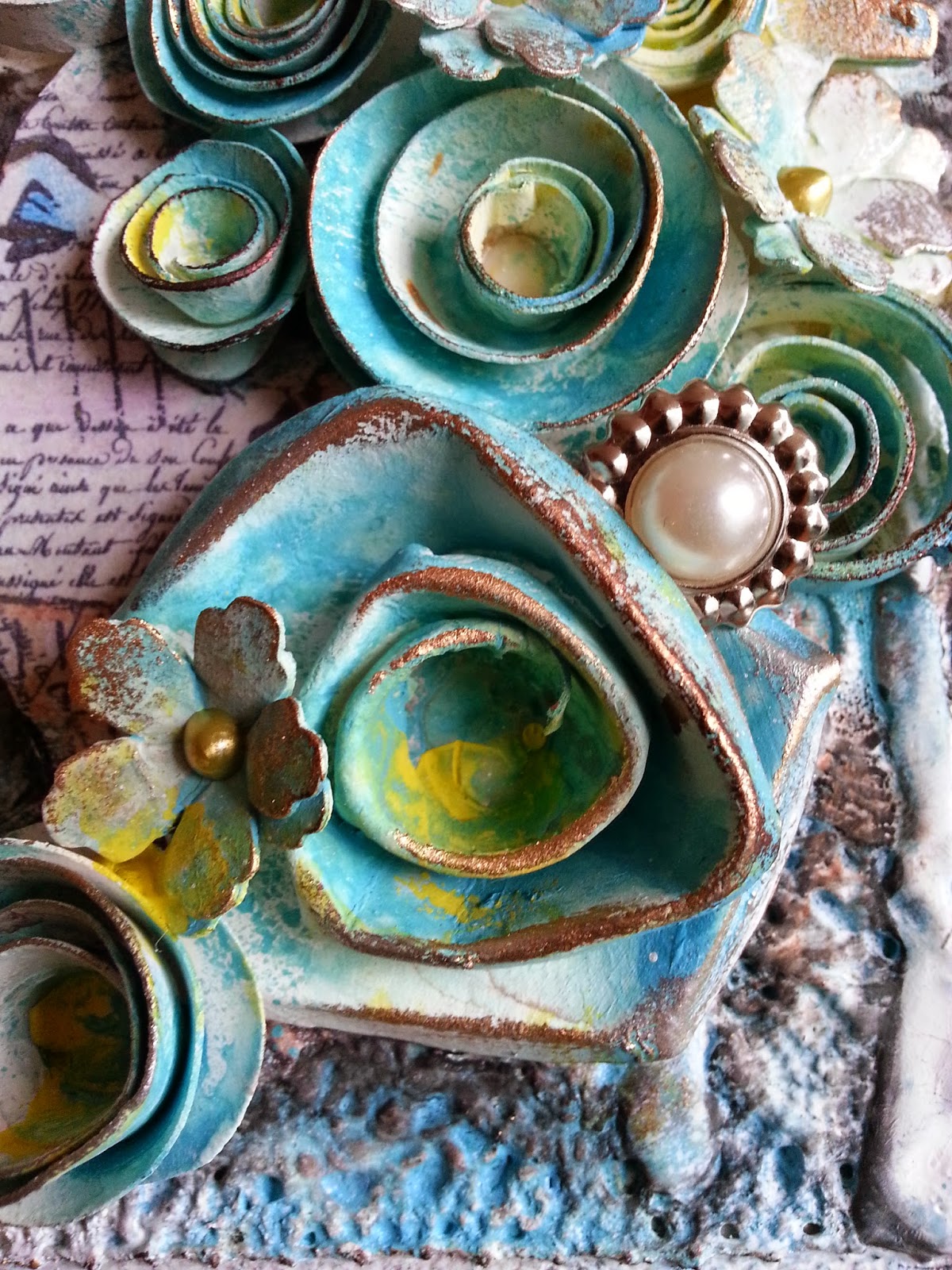 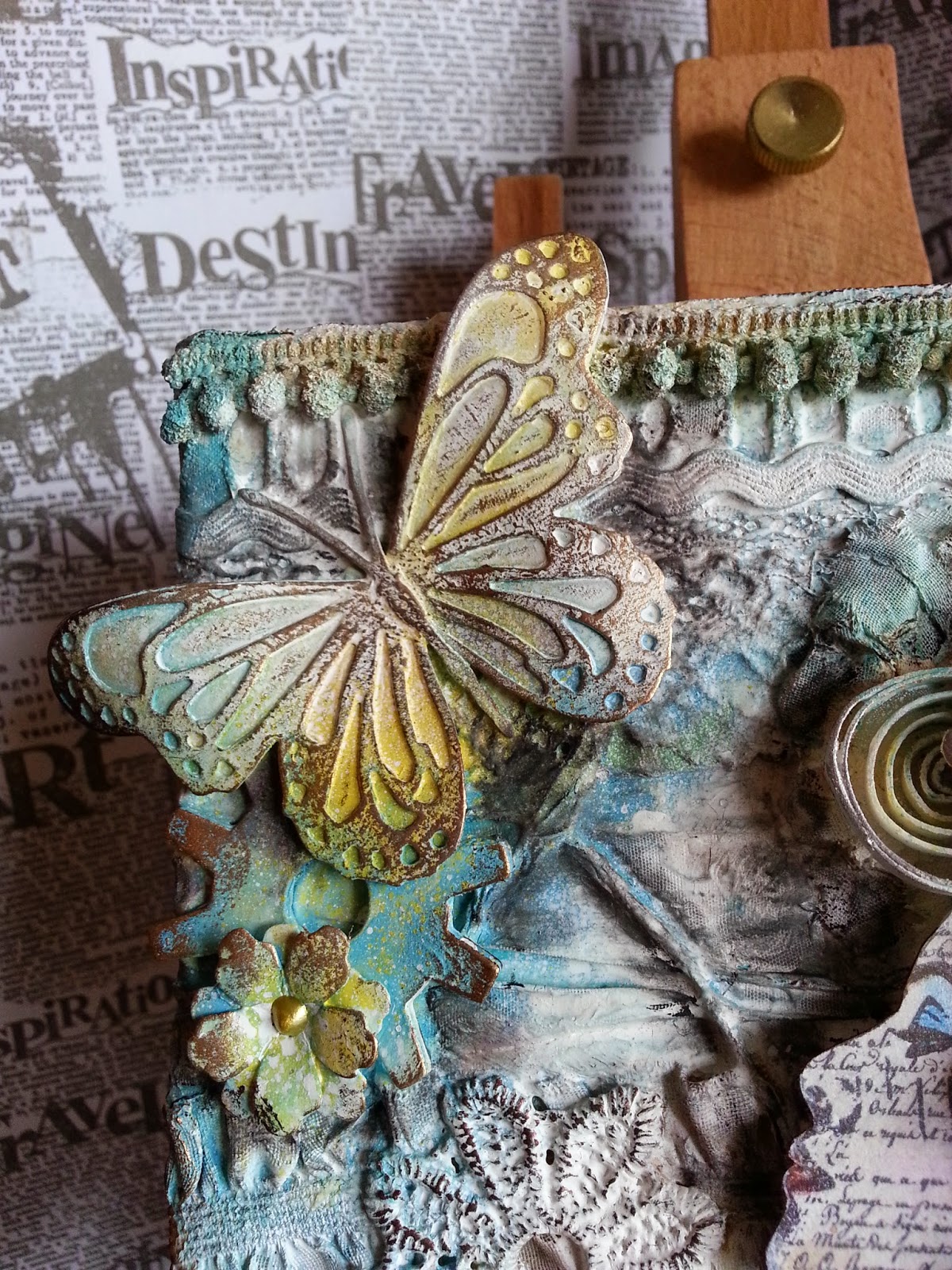