So here we are again, it's been a little while due to on going house alterations. Don't ask!
Anyone seen a film called Money Pit with Tom Hanks. LOL
Anyhow, I've managed to squeeze this little number out for a class I'm running at Sunrise Crafts at their new home in Wordsley, Stourbridge, on Saturday April 8th 2017.
Using an MDF Driftwood Circle the large one out of a pack of two. 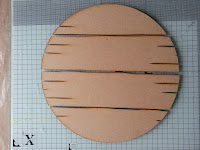 To begin I didn't want the project to be too big and bulky, so instead of using the backing strips I created a backing from thick A4 card. 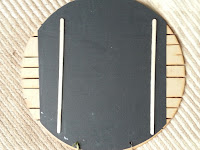 The MDF Circle was placed on the card and drawn around, this was cut out a few millimetres inside the draw line (it wasn't a full circle as  A4 card wasn't the same width, which was fine as it went down the centre to give support). Also added a little later were a couple of coffee stirrers to add a little more support, still slimline though.
Next came the initial layer of  brown paint on the right side, this was applied with a brayer and gave a nice even layer which dried quickly. Vaseline was streaked onto the brown paint from the edges inwards to act as a resist for the paint. A mixture of cream and white was brayered over the brown and left to dry, the excess paint and vaseline was removed using a baby wipe. 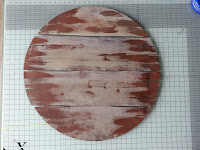 The Vaseline was reapplied covering some of the brown and some some of the White/cream combination, the next layer was white and blue. Again this was left to dry and removed with a wipe, this produced a distress driftwood effect. 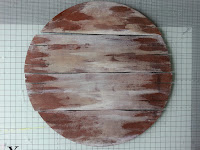 Random stamping was added using chicken wire stamp, text and wall effect then set aside to dry.
Two holes were put in the MDF to make a hanger later.

Now to the decoration, the fence was created first by stamping on tissue paper, this was then flipped over onto the wrong side and coloured with paint then dried gently with a heat tool. 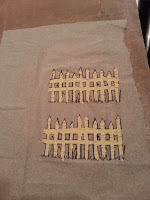 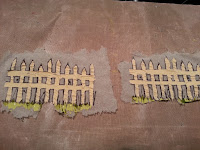 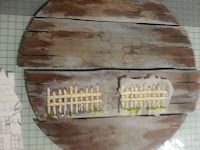 They house was next, 4 pieces of card were cut to the same size. Each piece was a different colour.  First, cream/white. Second, white/blue. Third, blue and finally Yellow Ocre.
Once dry they were each stamped with the same house image, using the lighter tone as a base, Windows and doors etc were cut from the coloured images to create a decopatch house.
Ooops moment forgot to take pictures.

The elements were distressed around the edges before being glued into position onto the house, the house was also edged with distress ink then sealed with distress wax.
Next up, the tree. Five pieces of card, two painted brown and three green all stamped with the tree image. 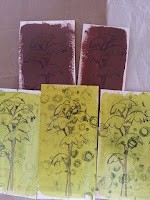 The brown tree trunks were cut out, ignoring where the green leaves should be.
The green card had additional stamping in green to add interest then the leaves were cut out and glued to the tree trunks. Brown distress ink was applied to the edges to take away the harsh white of cut edges. 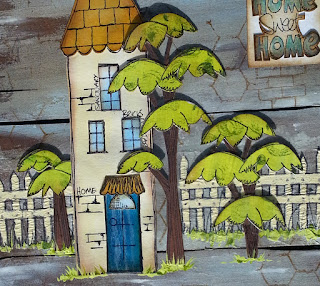 Home sweet home was stamped on white card and cut out, a pencil was used to add a touch of colour and distress ink used to darken the edges.  This was layered onto a further piece of white card and lightly coloured in brown to blend in with the project.
All the elements were glued into position and a further addition of green paint around the bottom edges of the house and trees.
Finishing touch was a twisted piece of wire and ribbon threaded through holes to create a hanger. 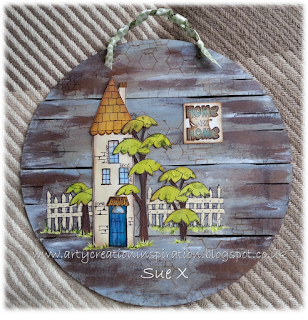 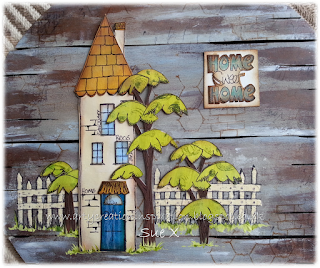