The 1st of December bought a number of complications with it.
This was the day my crafting buddy and I had arrange to meet up and have a play, however,  hubby decided to book the cats in at the vets, Penny for flu injection and Tom to have a few lumps checked out, poor lad has to have a little op to have them removed in the new year.
Daughter no.1 spent night throwing up and had to have the  day off school, fortunately hubby was working from home, so that was sorted I could still go out. She spent it in bed and didn't get up until I got home. Next was a family visit to the dentist. All good there.
Back to it.

This is what we made today.
My version. 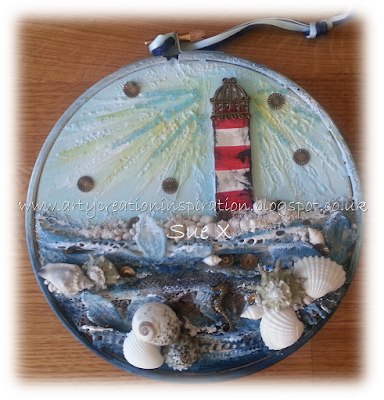 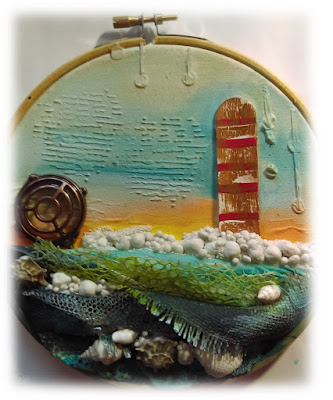 I'm really sorry but there are no how to photos (too busy playing), however I will be doing another and then I'll take a few snap shots.
First we decided on a theme beach huts or boats, we opted for a light house on an island, or sea breaker on a beach ( however you want to see it).
A large lollipop stick was cut in half and painted in chosen colours then sealed with a touch of Matt medium.
We began by using 2 layers of fabric laid over the inner ring of the embroidery hoop to create a base to work on, using layers of lace ribbon and threads we built up the ocean foreground. The lace etc was saturated in sculpture medium and twisted into place to create movement, once all of the fabric layers were in place the top hoop was lowered into place and tightened, the light house was glued in position with a blob of 3D gel  medium, this was then heat set which hardened the structure paste.
Light paste was used through a stencil to add texture to the sky line.
Paperartsy paint was used to colour the piece, adding white to give the impression of waves and sea foam. Shells were glued using 3D gel along with art stones, (now known as kitty litter! Rebecca you know why).  Small Tilda sequins were pushed into the gel and stones randomly to add yet another visible embellishment.
That's where we got to, crafting buddy Rebecca was then given strict instructions to sit and finish it.
I had to wait for hubby to finish his work off before I could do mine. I added a seahorse charm  which I found whilst rummaging for a metal birdcage to make the lighthouse top. I used my Tim Holtz scissors to disassemble the cage by cutting out the middle section with the bird in, this was glued into position with glossey accents which hopefully gave the effect of glass.
Mini glass beads in pale blue also added a visual bit o bling, its still lacking a little something but I will sit and look at it and maybe something will jump out at me.

That's it for now. Hope you agree that they are both fab so far.