Well not really, just been on holiday to Disney in Florida, with a touch of  Seaworld and Universal Studios thrown in whilst avoiding tropical storms and sunburn.

Anyhow that said, girls are back at school, plans for house extension have been passed and we are now looking for a builder. So far the quotes we have had are insane and are more than our first house cost!

Anyone in the West Midlands know any decent builders?

Anyhow, change of subject, "I've missed crafting". I have missed six weeks plus and need a fix I did try yesterday (Monday) but as I sat prepared, mat out cuppa in hand I just froze!

I'd had an idea when I first read that the SDC challenge was mail art, mmmm, mail, recycling used envelopes.  Then I remembered I'd had a clean out and all the interesting used envelopes I saved for erm, years, had been put in the recycling, bother!

So now it's Tuesday and having collected a few envelopes (distinct lack of post when you want it),
I began my challenge. This is how it turned out. 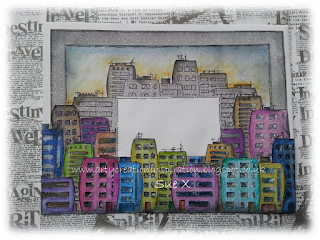 This is how it began, used envelopes and a great stamp! 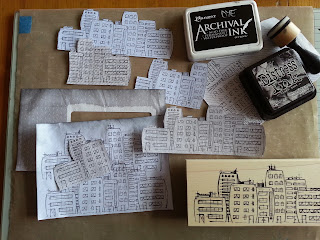 Oh and of cause a new envelope to be decorated.
Unfortunately the pattern on the inside of the used envelopes isn't visible on the screen, the houses were stamped several times and coloured with watercolour pencils. Then the edges of all the pieces were distressed in black soot.
Everything was glued into position, at this stage I felt the sky needed colour too. Out came the gelato's in yellow, orange and blue,  A small amount was added  then smudged with my finger tip,  this gave the impression of a sunset.
Still looking as if something was missing a dot dash pattern was added to the edges.
There you have it, challenge complete but only just, for more inspiration hop on over to the Stampotique blog here.
Sue X