A few days ago (its now been a couple of weeks, I'm a tad behind with posting) I cut open a canvas, wanting to create an explosion of something erupting out of the centre.
Very rarely does my artwork replicate what I image and this was one such piece
My working mind set changed and went in a different direction this is how it ended up. 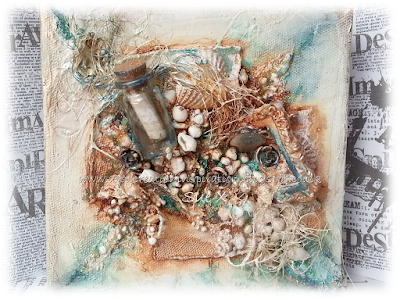 Being summer (we'll sort of) I decided on a sandy, almost beach like theme. Having  purchased art stones from various companies I thought it would be a good idea to blow the dust off them and include them on a project.
As I said I cut into the canvas 6x6" distress the edges then folded them  down gluing them in position. Grey board was used to create the inner platform on which to build  the piece. 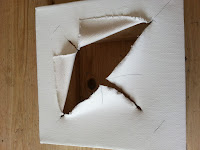 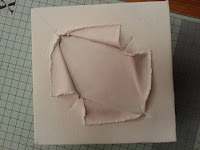 This was all painted with white gesso ( I stayed away from black for a change) art stones were added at the corners and then I went about finding embellishments 'n' bits to decorate the piece. 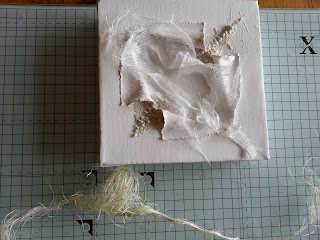 After hunting down a few things I pulled apart a piece of cheese cloth and lay it in the opening I thought it could resemble fishing net. A length of sisal type shredded rope was twisted around a piece of wire and twisted even more to replicate an old worn out bit of you guessed it, rope.
This was placed on the top of the cheese cloth both of which were glued into position.
Texture paste was added to the area surrounding the torn canvas and work began on the inside while it was drying.
A miniature bottle was filed with beads, a paper clay frame was cut and added along with a few shells and metal embellishments these were stuck into position.  Massive art stones from powertex, medium and small prima art stones were added around the items to give the impression of treasures half buried in sand an washed up on a beach.  The piece was given a coat of white gesso (not the bottle) to make an even base coat. 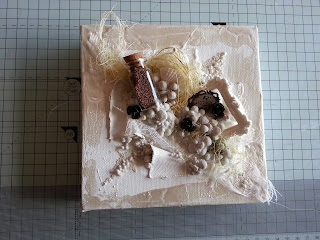 Once this was all dry Lindys sprays added the colours sort of sea, sand beach like.
Treasure gold added a few zingy highlights along with more touches of white gesso.
Blue beads added at the last moment to give a watery impression. Oh A few more small shells too just to finish off.


Here are a few close ups. 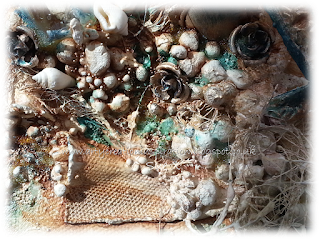 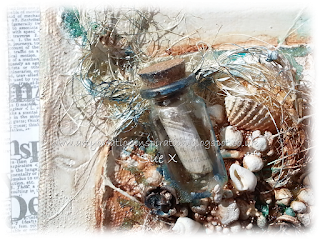