Tuesday Fun
It's Tuesday again, less than two weeks and the girls will be at home for six weeks solid.

This will be my last official crafting Tuesday with sister-in-law Nola for seven to eight weeks, even then I'm not sure when we'll be able to squeeze in a session as hopefully we will have the builder's in.
Now, I would like to say I'm having  a lovely huge craft room built but alas no!  We are going over the garage to add a bedroom for Georgie, she has the box room and if her feet grow anymore she will not get in there. (Sorry G).  We are also having an extra bathroom, two girls one bathroom need I say more.

Anyhow this is what we made today!

This one is mine. 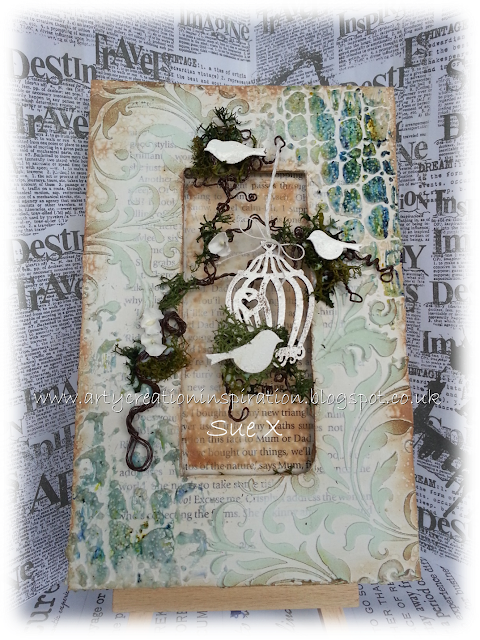 This one is Nola's. 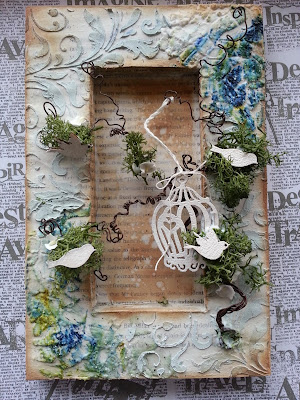 I'm sure you'll agree they are both fab and who would have thought they began life like this. 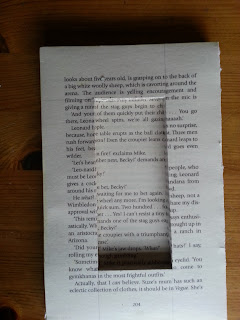 A paperback book had the cover removed and was divided into two sections.
The book halves then had an aperture cut into them,  the edges were glued together and held tightly with bull dog clips until set. (greaseproof paper  was placed between the clip and book so
as not to damage the pages).
Both clear gesso and white gesso was added to the pages so that part became translucent and part was semi translucent.
Sorry no photos got carried away with making it.
Next we added texture paste with a variety of mediums mixed in (fine art stones, infusions powders)  through a couple of masks.
The edges were inked along with the centre of the aperture with brown distress ink then misted with water and lifted off almost immediately to reveal a mottled effect.
The bird cage and birds were heat embossed with white embossing powder.
Wire was twisted to form the tree branch, using 3d medium this was glued into position. Green moss was added  to create the foliage along with a few small flowers to give the impression of blossom.
The birdcage had a piece of thread attached to the top and this was glued onto the project to give the look of a hanging cage,  the birds were glued into position and the project was complete.
Not bad for a spur of the moment project.
Sue X
Posted by sue :) at Tuesday, July 12, 2016