I've watched many video's on using sculpture mediums/powertex, from initial preparation to completion.  I've not used the proper stuff before, normally I  substitute plaster fabric to create a piece of artwork, so, I thought it was time to give it ago.
I'd recently bought a plaster head from a craft shop in Telford, (Crafty Bunch),  the clear sculpture medium by Finnabair had been collecting dust for a month or so in a little nook of the dining room come crafting room, I had an idea that needed to be released but failed miserably.
With that in mind this is how I began.
Using a block of wood which had a former life as a tea light holder and a empty kitchen roll cardboard tube,  I created a body for the plaster head. To do this I made a slit up one side of the tube so I could make it fit into the tea light holder circle. I then used masking tape to hold the tube to the correct size creating a long cone. The whole of the tube was covered with the tape to make it stronger and stuffed it with tin foil. This was glued into position with heavy gel medium. 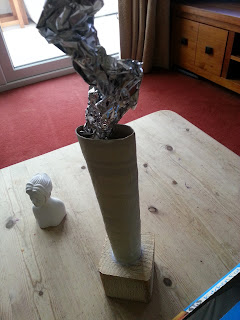 The head was also stuck into position with the heavy gel medium and masking tape overlapped the join. 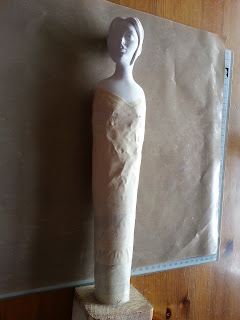 I was a little sticky during the next step so didn't take any photos, sorry,but this is what happened.
I raided my old t-shirts and found an old white boob tube type top which was way past its best and probably will never wear again, I tore off all of the sewn edges and elasticated bits then tore strips for ease of application.
I didn't have any gloves, fortunately my medium was clear so you couldn't exactly tell how much mess there was, I did try keep it to a minimum though.
I put a puddle on medium onto my craft mat and used a paint brush  to apply it to the strips of fabric, making sure it was well saturated. I began at the top by the plaster head and worked my way down just winding the fabric to the base the sculpture.
A larger piece of t-shirt fabric was used to create a shawl and shredded powertex fabric was added to create texture.
This was left to harden in the conservatory, not that this helped because the weather changed and the room which in the summer is so hot you can't  sit in it became a cold room. Fortunately the fabric hardened off nicely, probably about three days to go off completely.
Amazing, Love it.
Want to make more! 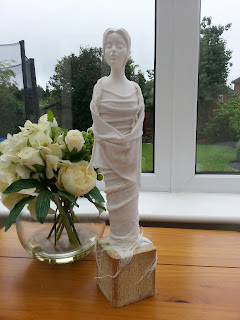 So drying time over I wanted to paint it and add interest to the piece.
Pale blue chalk paint was used all over the piece and highlighted with white, old gold was dry brushed all over.
Originally I imagined  using denim but when I tore the denim it didn't have the look I wanted, it was new denim not old worn frayed denim, so I'll save that for another project. With the denim torn I will throw it in the washing machine every time I do a load that will distress it nicely.
So, that said, not the dark indigo blue I had in mind but it turned out okay for this project, I would like to add more detail but not gonna rush it, the best things come to those who wait (or can afford it). LOL
Here are some pictures. 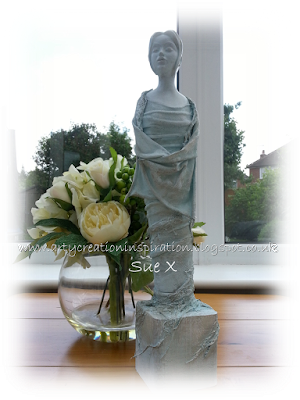 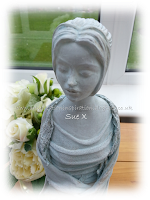 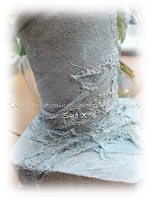 Hope you like my first Sculpture medium Sculpture.
Sue X
Posted by sue :) at Friday, June 17, 2016