Well, who would have thought, week 1 of the school holidays is over.
Only 6 more to go!
Summary so far.
Monday was my youngest daughters birthday, no crafting done!
Tuesday my youngest wanted to go spend birthday money (not all of it), no crafting.
Wednesday my sister-in-laws birthday, made a quick quilled card and another one for their anniversary on Friday. 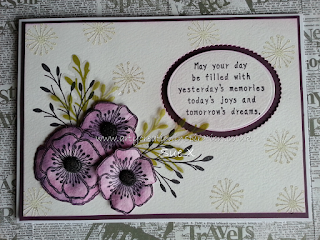 Thursday hubby worked from home no crafting.
Friday rain no crafting not sure why not.
Saturday was not much better, Jess went to stables to get her weekly horse fix, Georgie didn't do much (that's teenagers for you). Steve went on the weekly shop followed by car cleaning and game playing on X Box and I made a card. 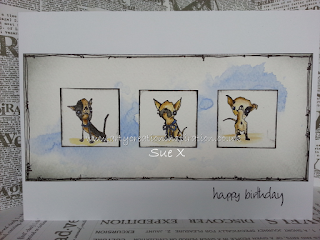 I began by stamping these cute stampotique dogs  (my holiday treat to myself) onto watercolour card and coloured them with my trusty distress inks (as watercolours).
Next  a length of watercolour card was cut to size and dipped into distress ink which had been pressed onto a glass mat water spray was added then dried.
Black lines were drawn around the edges of the pieces and the the card was stuck into place, a JOFY happy birthday sentiment was added to finish off the card.
Sunday more rain!
The wet cats were sent upstairs to wake the "teenager" up. LOL
We all popped to decathlon for a Horse Whip for Jess and dance leggings for Georgie followed by dinner at Grandmas.
Back home "I made another card".
This was a request by hubby as one of his team member was leaving, instead of shouting obscenities about leaving things till the last minute I went with the flow and came up with this card.

Unfortunately the picture quality is poor due to making it during the evening and rushing to get it done in time, you get the idea though. 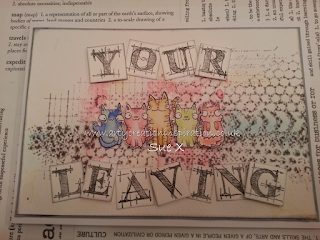 Again I used a Stampotique stamp this time Cats, cute and apt as one appeared to be waving.
Images were stamped onto watercolour card and coloured in distress ink.
The back ground was dipped into three distress colours which had been watered down and dried in between dips. A huge Carabella stamp was used to add a little more interest and it was all layered up and stuck down.
The words were made up from Indigo Blu alphabet stamps which were individually stamped/cut and inked around the edges.
Some of the letters were stuck with 3d foam to lift them from the background and others left flat.
That's one week over six more to go!