I've had this little number Brewing ever since I saw the original back in May 2014 on
http://tworzysko.BlogSpot.co.uk.
I couldn't afford to go to a workshop, so, I thought I would give it a go myself, this is my Finnabair inspired canvas.
To begin I put two  8x8 canvas boards together, flipped them over and taped them together with patterned tissue tape. 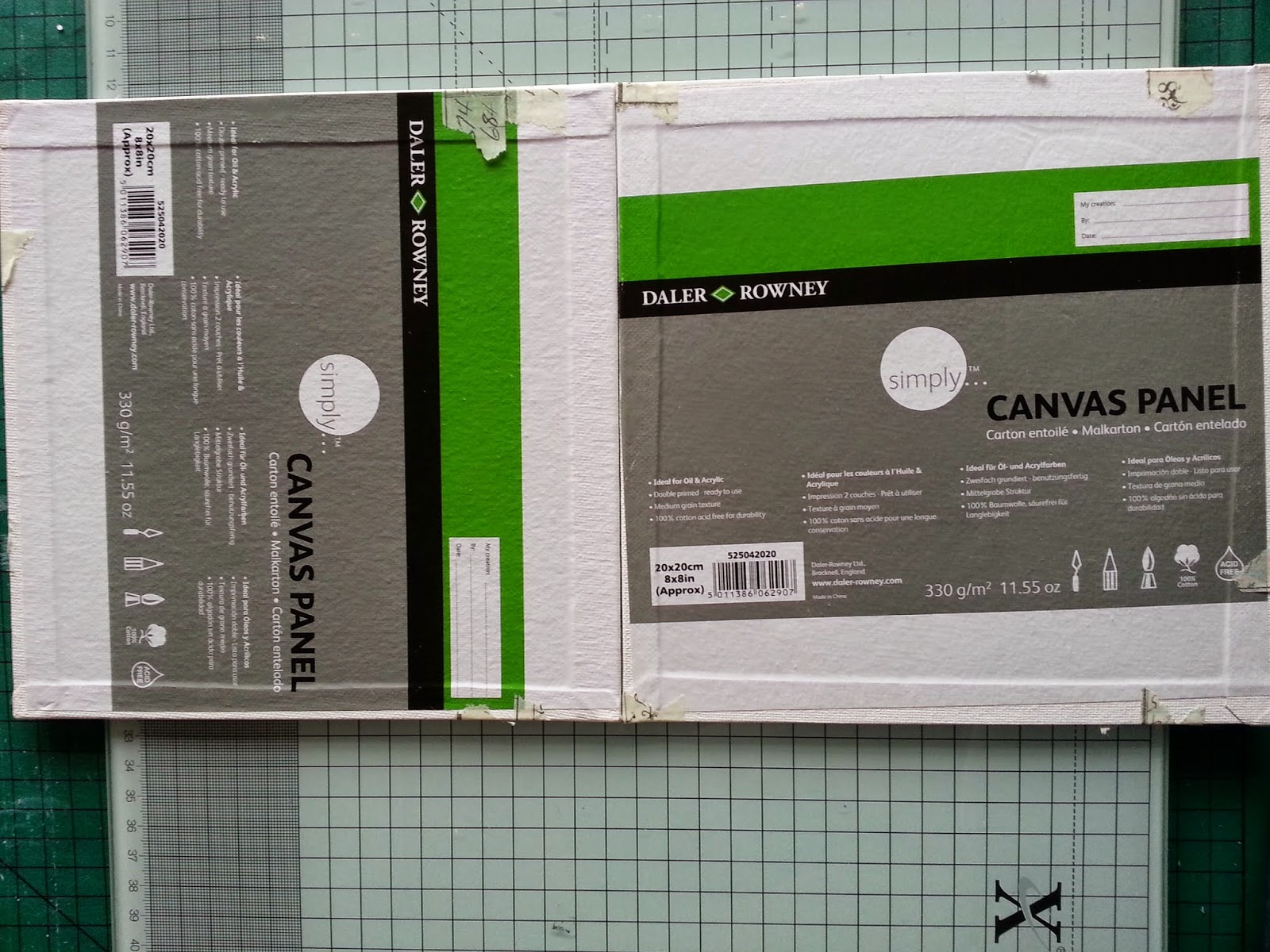 I wanted to create some texture and so using regular PVA glue trailed beads down the length of the  two canvas's. Grunge paste was added at the mainly at the top but also randomly  around the board using a pallet knife I created soft peeks in the paste. 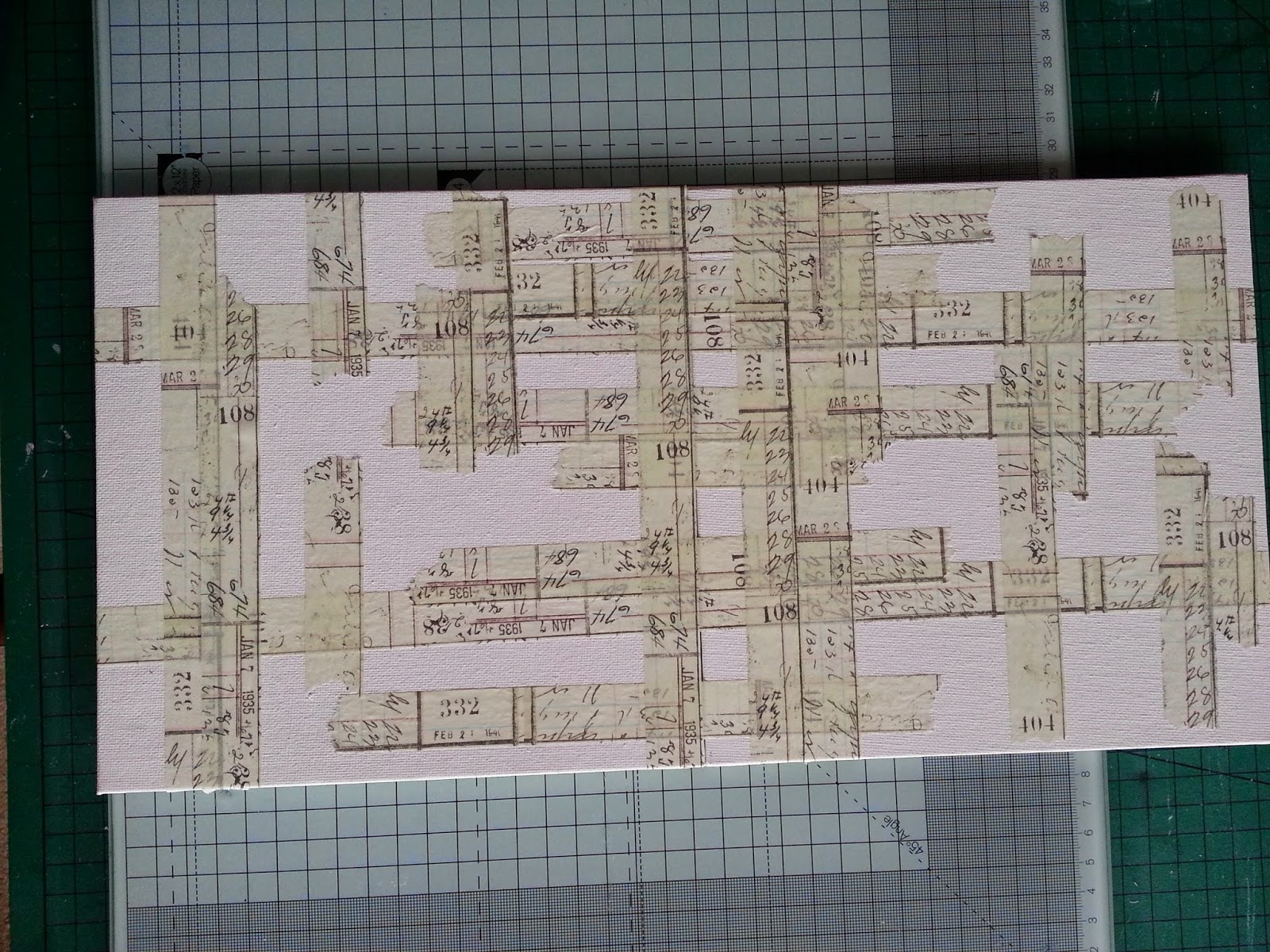 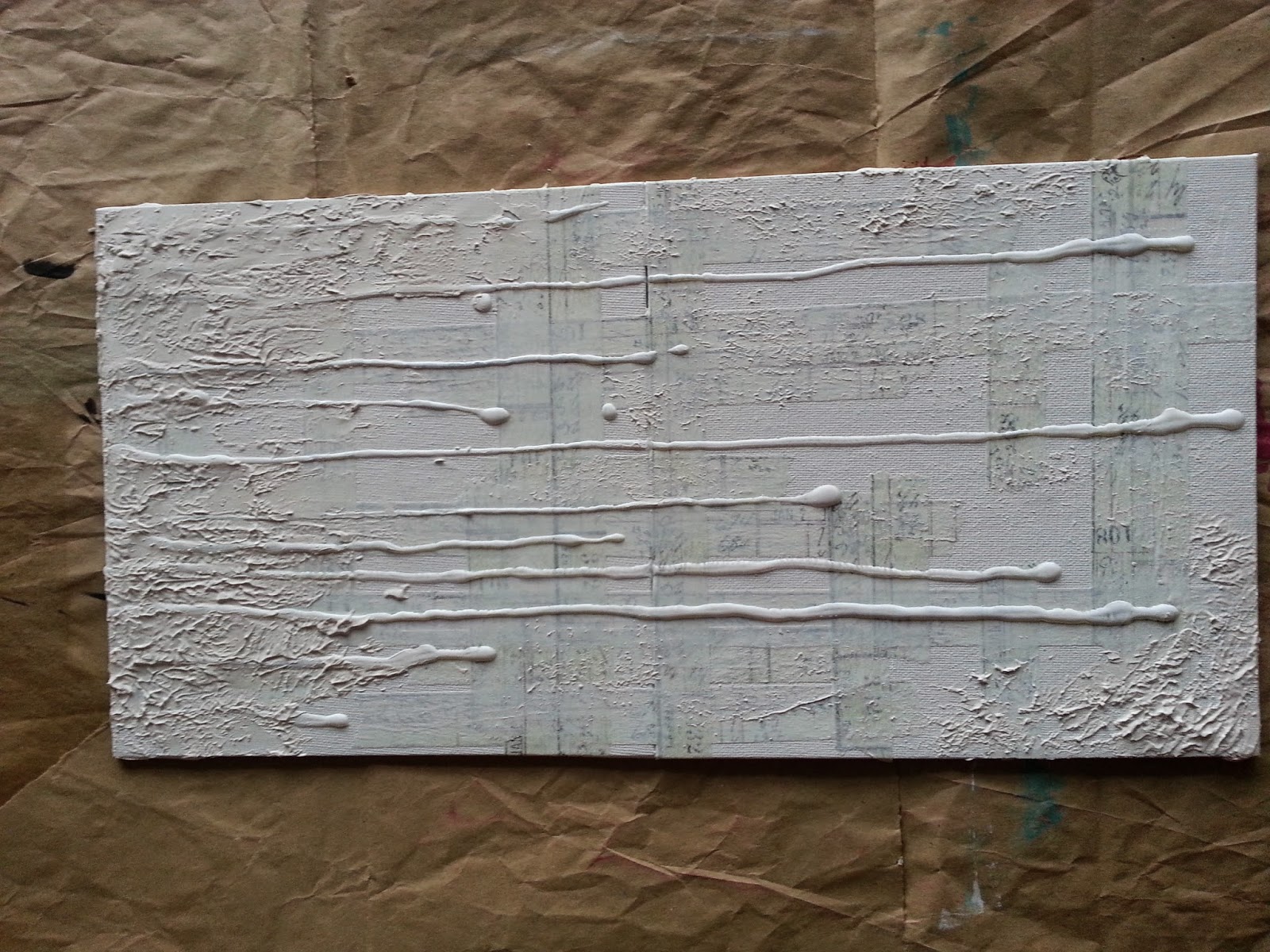 I gave the whole thing a coat of gesso leaving areas where the tissue tape could show through.
Next job was getting a photo of my two cheeky monkey daughters, this proved more difficult than expected. I raided all the embellishments I could find and arranged them on the boards around the photo. It was all stuck down using glue and seal then left to dry over night. 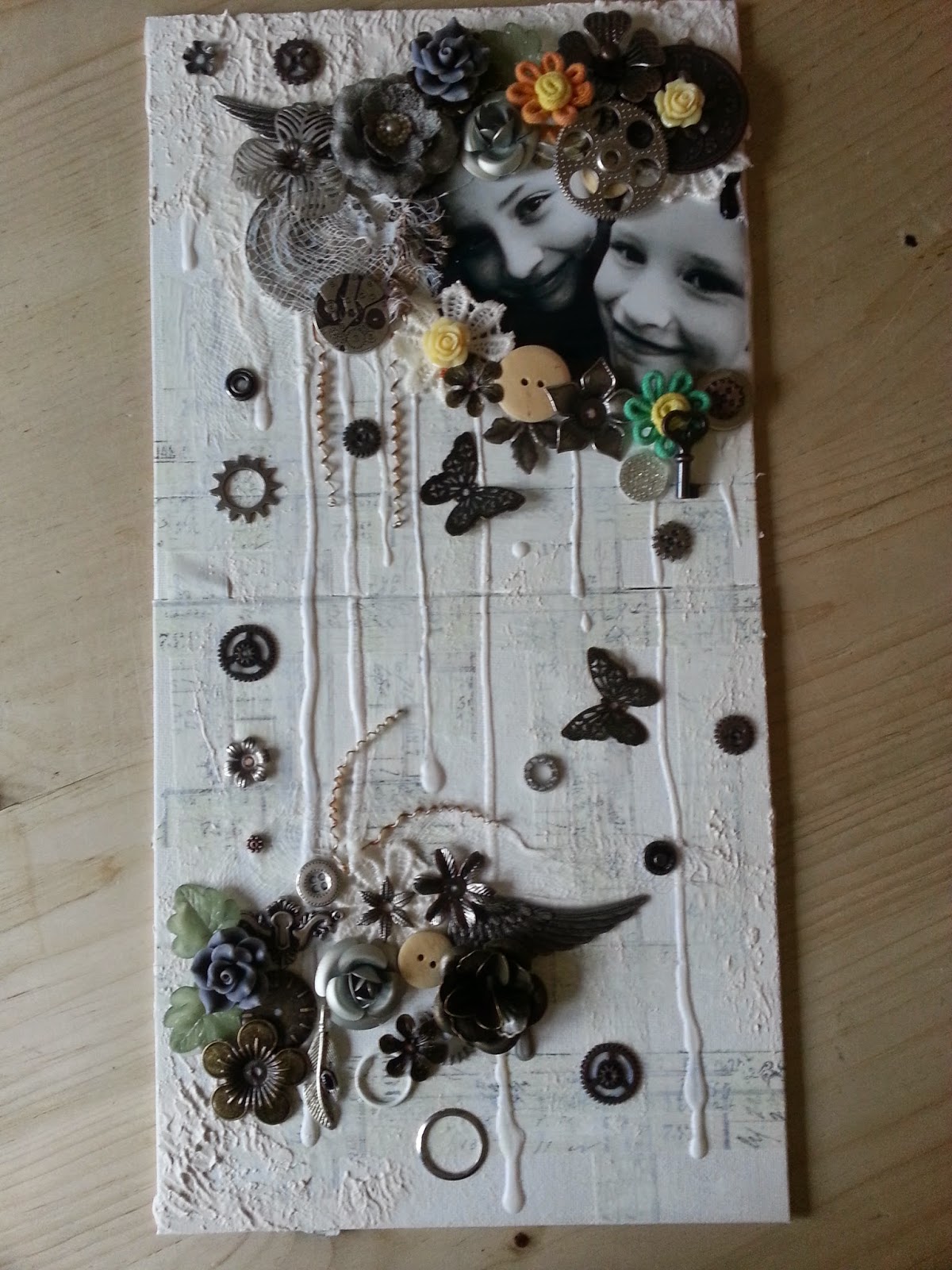 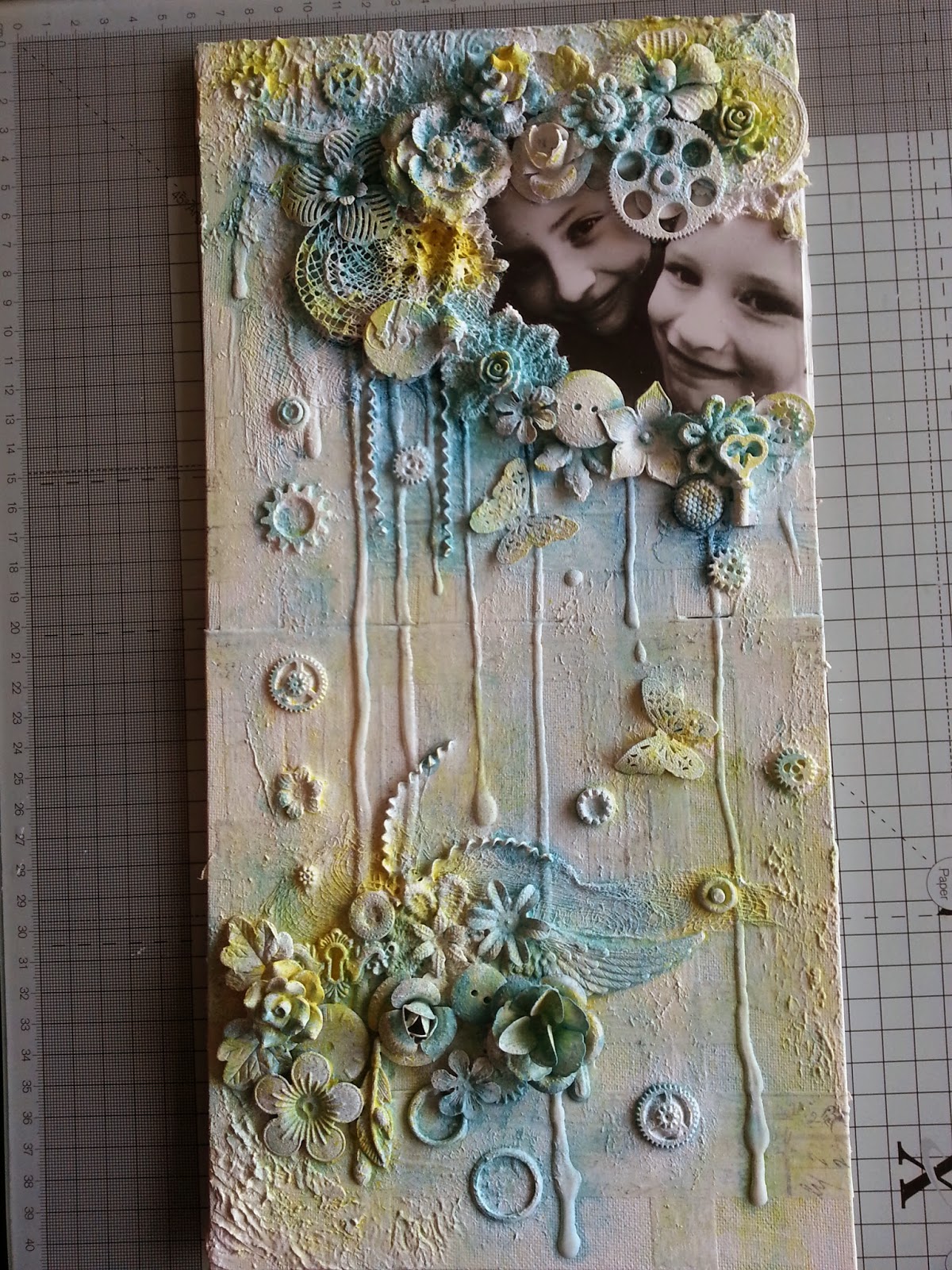 Once dry I painted all the bits and bobs with gesso to neutralise the colours, it took two coats. At this point I thought I'd taken a photo but obviously I hadn't.
Next I put a small amount of Zesty Zing and Mermaid Paperartsy Paints into  spray bottles and added an equal amount of water. The colours were sprayed randomly onto the canvas and let drip down the two boards.
A small amount of stamping in black archival in was added, then a sketching pencil was used to add shading around the drips  of glue and blended/smudged into the surrounding area.
Treasure Gold in White Fire and Silver was added to the edges and raised areas to add a bit of bling.
The two canvas's were separated and there you have it. 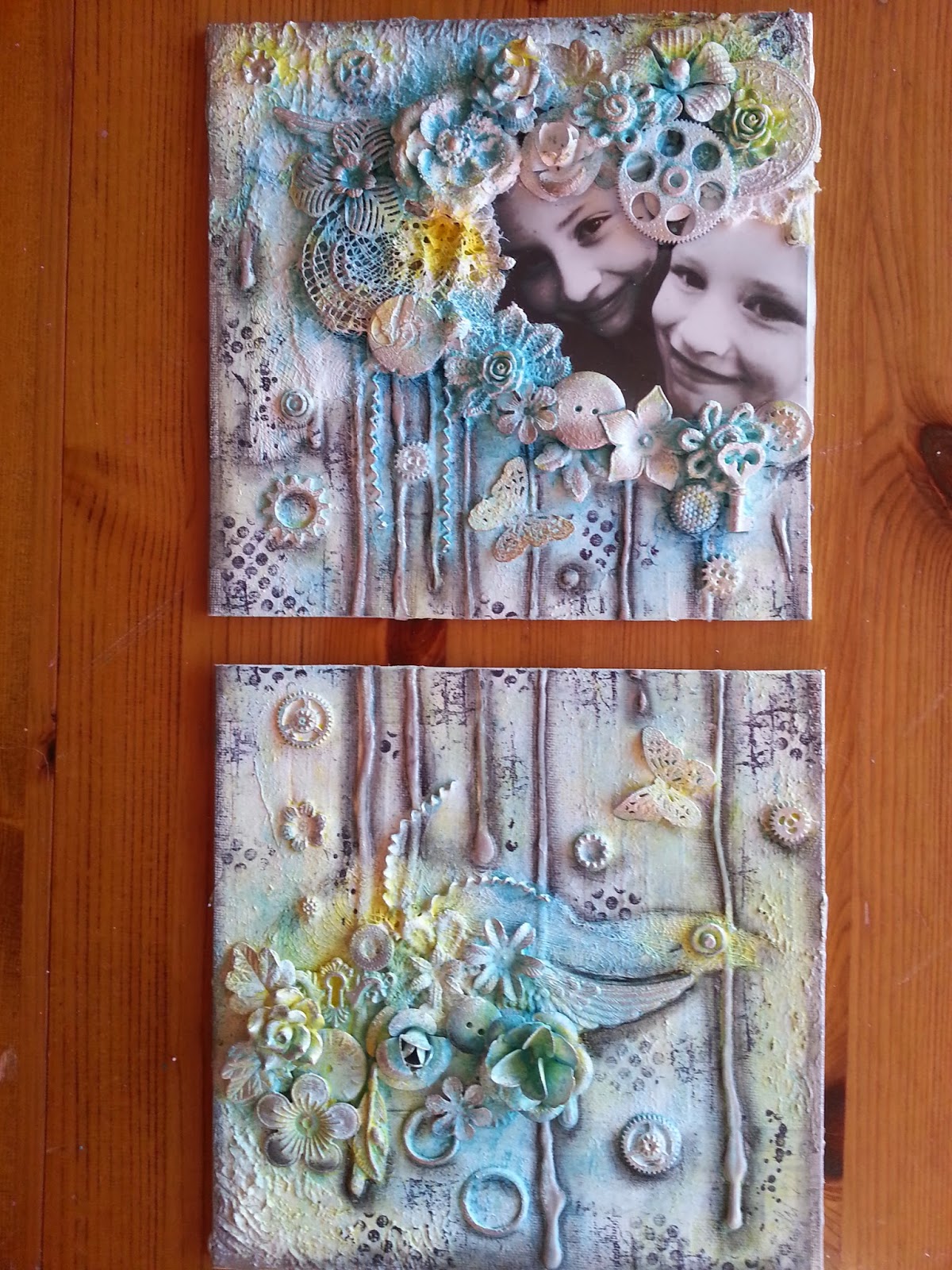 Here are a few close ups! 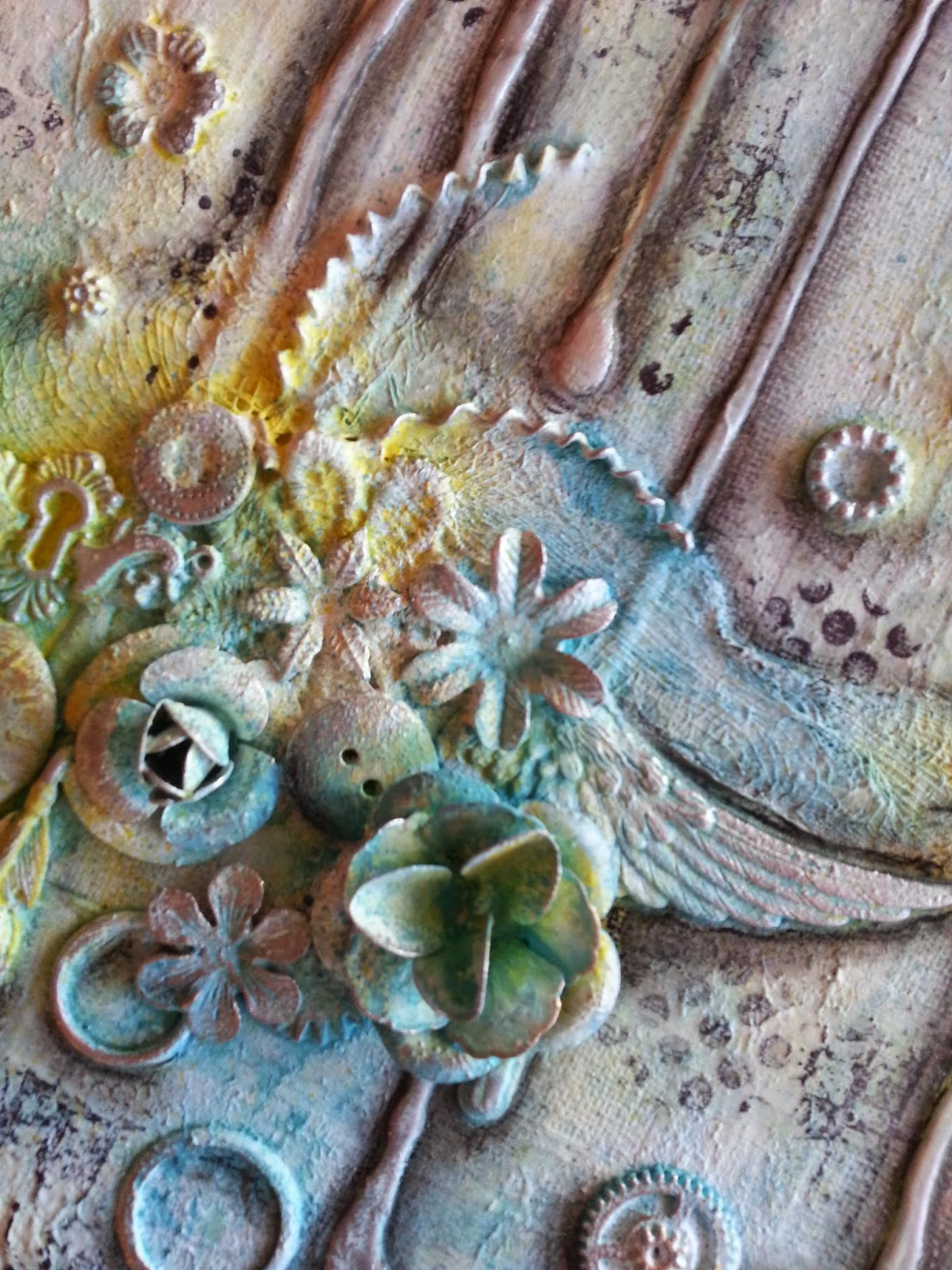 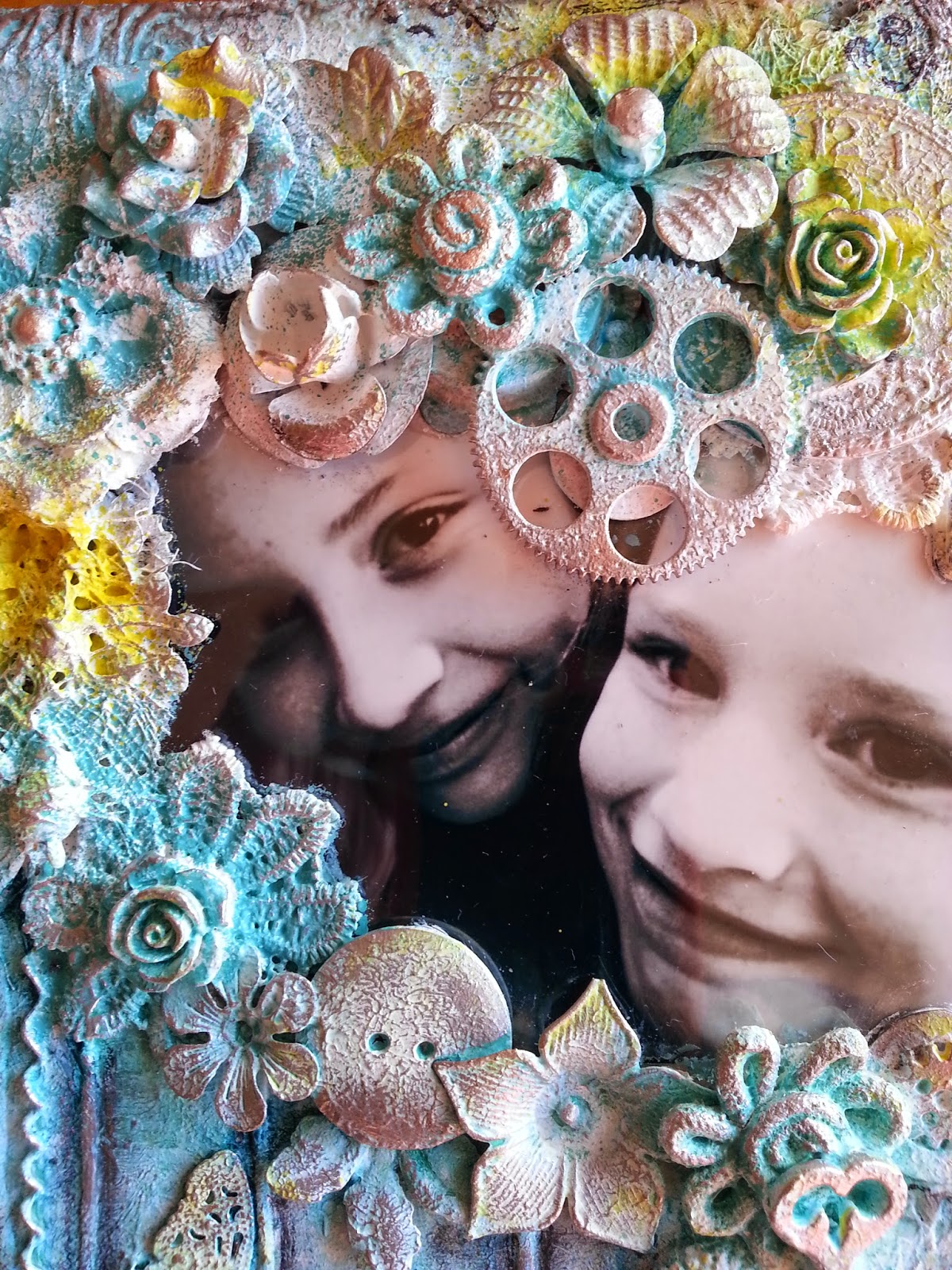 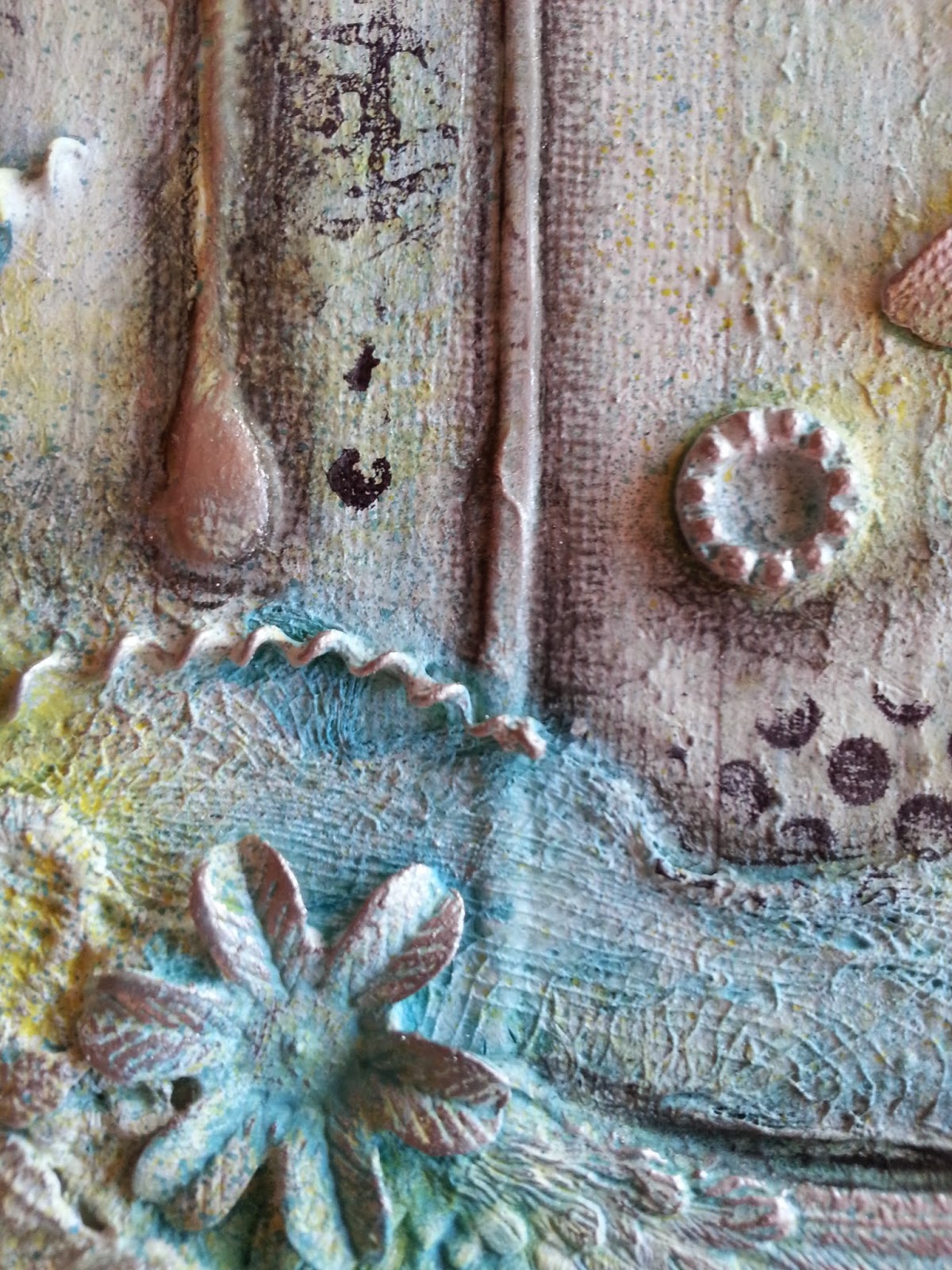 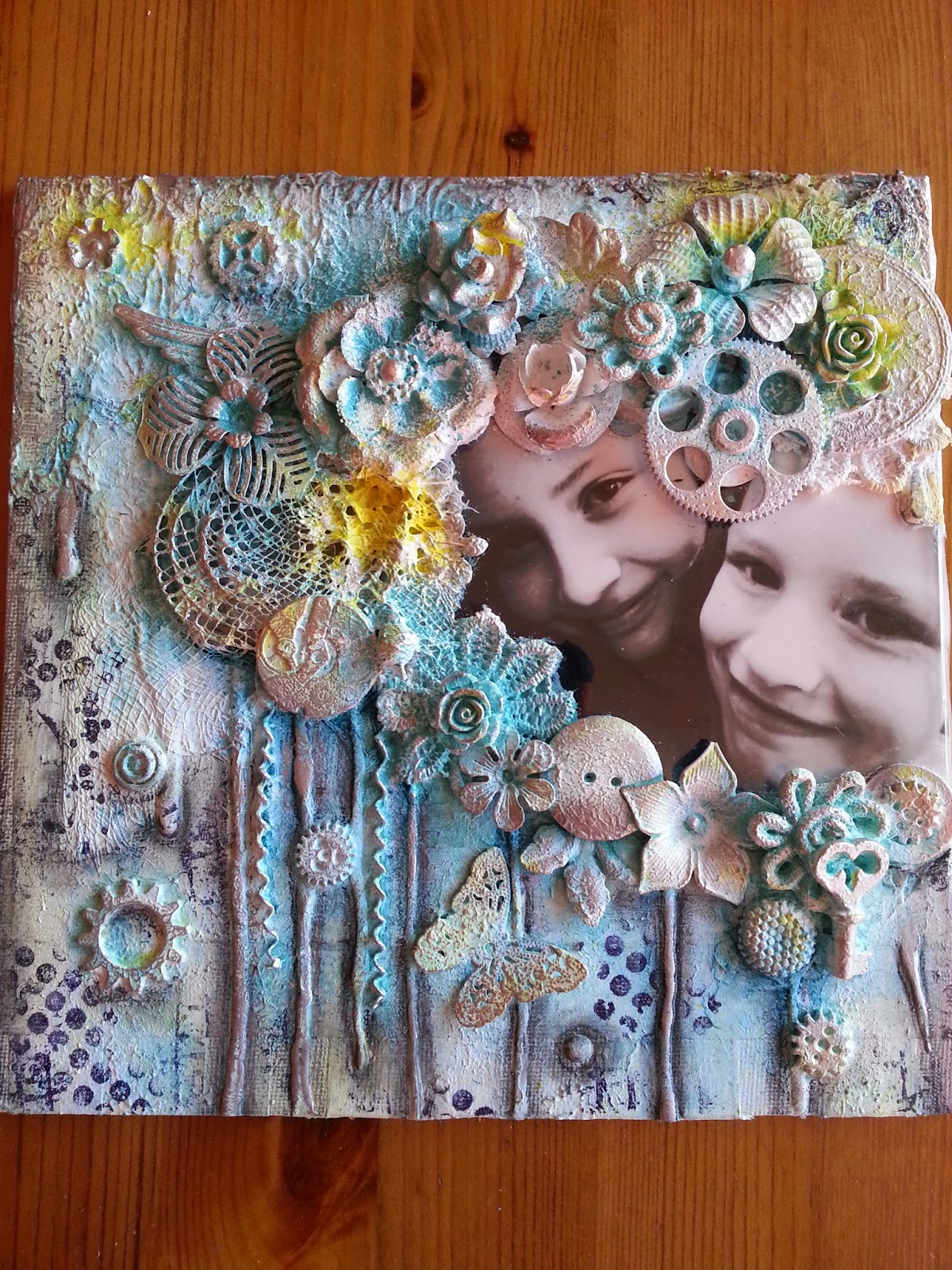 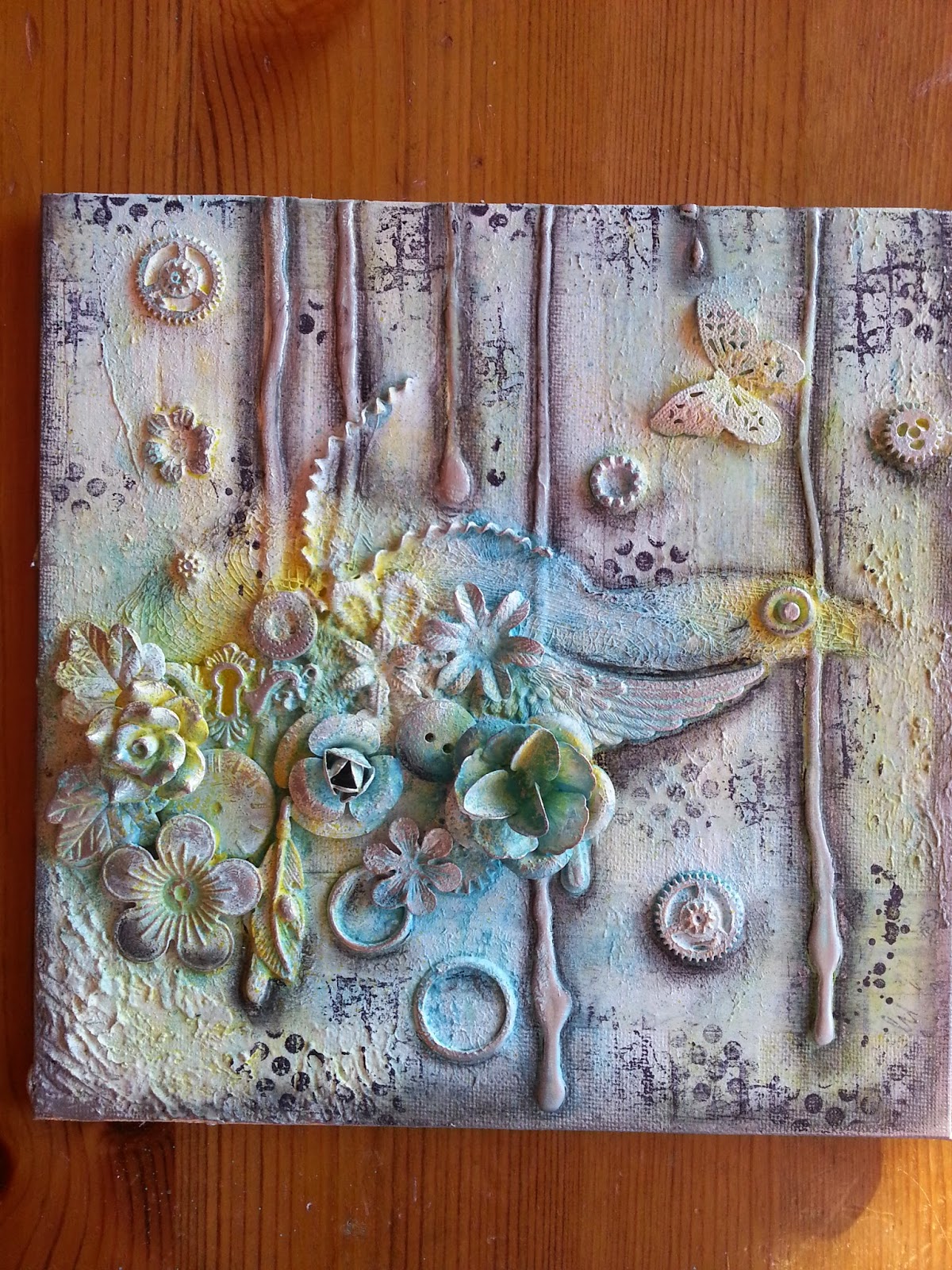