1st  of August what do I do?
I know, raid mums stash of paints and spectrum noirs.

So with  permission to use the acrylics I began.
It took me a long time to decide what to do but found inspiration from my outfit (a great Next purchase) also known as a onesie or as I spell it 1zy. I decided to base it on pop art.

Using a canvas I had two years ago, I sketched out what I wanted it to look like.
Then it was time to get messy with paint. At this point mum was worried about the mess and tided up her next project(which is coming along great:-))

Using bright yellow I started to paint the background. Followed by vivid colours for the rest. It was starting to look good. 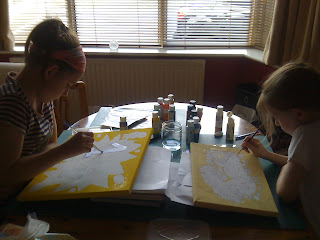 When the paint was dry I added detailed parts with SPECTRUM NOIRS. On the zig zag pow bubble I used fluorescent orange to make it stand out. I also did a cartoon character with these felts.

There are aspects of this pop art from Andy Warhol and other artists  where they use arrows and explanation marks .

To Finnish it off I added Ben Day Dots also known as SEQUIN WASTE to give it the finishing touches. It is called Ben day dots because a man called Ben Day first used them.  The dots I used were from a stamp by stampers anonymous Bitty grunge CMS089. 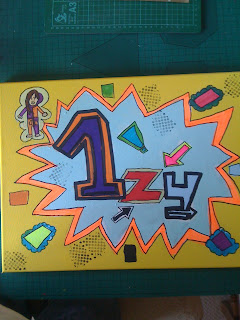